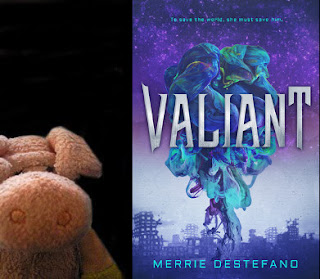 What is it about:
The Valiant was supposed to save us. Instead, it triggered the end of the world.

Earth is in shambles. Everyone, even the poorest among us, invested in the Valiant’s space mining mission in the hopes we’d be saved from ourselves. But the second the ship leaves Earth’s atmosphere, our fate is sealed. The alien invasion begins. They pour into cities around the world through time portals, possessing humans, forcing us to kill one another.

And for whatever reason, my brother is their number one target.

Now the fate of the world lies in the hands of me, a seventeen-year-old girl, but with the help of my best friend, Justin―who’s suddenly starting to feel like more―maybe if we save my brother, we can save us all...

What did I think of it:
You can bet I pre-ordered this book after seeing the cover and reading the blurb. Then I was offered an Advance Reader Copy, and I just couldn't say no to the chance to read it early.

The book begins with a prologue to explain the situation and what is at stake: After the launch of the Valiant aliens attack earth and for some reason they're particularly interested in Sara's brother Gabe. Only minutes into the invasion he is killed. Then Sara meets an alien who sends her back in time and tells her it is important to keep Gabe alive if humanity is to survive.

And that's where the story really kicks off: Launch of the Valiant is near, Sara knows what's coming, and knows she has to keep her brother alive.

I was immediately drawn into the story which is a thrill ride of dangerous situations for Sara and her friends. As they barely escape one attack, the next danger is already waiting for them. This book is about 400 pages long, but with all the action it felt much shorter. I couldn't put it down, I had to know what would happen next, and if Sara and her friends manage to keep Gabe alive and out of the hands of the aliens.

In between the fighting, fleeing, and planning their next move Sara starts to realize she might be feeling more than friendship for her best friend Justin. This storyline takes second place (as it should in such a dangerous situation), but is very sweet. I also liked Sara's relationship with her friend Natalie which is one of mutual support. During their adventures they also meet other people, but when the aliens can take over a human body, who can you really trust?

All in all this is a really awesome, action-packed read, with twists and turns I didn't see coming and that kept me on the edge of my seat.

The book ends in a way that makes it work as a standalone, but it also made me more than eager for more. You bet this book ends up on my keeper shelves once my print copy arrives.

Why should you read it:
It's a thrilling and suspenseful YA SciFi read.