Unmask Me If You Can - Book Review by Voodoo Bride 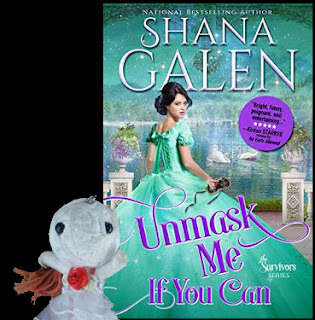 Unmask Me If You Can (The Survivors #4)
by Shana Galen

What is it about:
This masked lord...

Lord Jasper, younger son of a duke, suffered horrible burns fighting in the Napoleonic Wars. He wears a mask to hide his face from the stares and screams and finds comfort in the shadows. Jasper is an exceptional bounty hunter, so when a woman summons him to her deathbed and asks him to find her runaway daughter before she passes away, he doesn't refuse. Jasper is close to his quarry when he's knifed by an assailant. Imagine his surprise when he regains consciousness in the arms of the woman he seeks. Except she's not at all what he expected.

Is not the only one with scars.

On a remote cliff on the sea, Olivia Carlisle calls her five-year-old son in from an approaching storm. But the little boy is more interested in the man he's found on the trail to their hidden cottage. Olivia fears men and wants nothing more than to leave the injured man where she found him. But his knife wound is severe, and with the approaching storm, she knows leaving him will condemn him to death. As Jasper begins to heal, Olivia acknowledges her attraction to him, even though such emotions terrify her almost as much as returning to London. Jasper must convince her that her only chance at safety is to challenge the man who pursues her. They must travel into the lion's den—he to face his vulnerability and she to face her worst fears.

What did Voodoo Bride think of it:
I always enjoy Shana Galen's Historical Romances, so when I was offered a review copy of this book I jumped on it.

I encountered Jasper in An Affair with a Spare and he was a very intriguing character. So I was happy to discover he is the hero in this book. He is scarred by the war, both physically and mentally, although he isn't really aware of the last. He's become jaded, although he keep to his strong code of honor.

And then there's Olivia. She is scarred mentally as well. She had enough sense to run away from those that would hurt her and her son, but she's so busy with protecting her son from harm, she doesn't really realize how lonely she is.

The first half of the book Jasper and Olivia get to know each other and both have to get over some of their deepest fears. I loved seeing the both of them grow and start to trust each other. Olivia's son was a nice addition. I usually don't care for children in romances, but Richard is a cute and inquisitive kid.

The second half of the book there is more suspense and danger for the three of them. I rooted for Jasper and Olivia to realize what they felt for each other and for them to be able to face their demons and beat them. I couldn't put the book down. I had to see them overcome their problems and find their happy end.

All in all this is a delightful and suspenseful romance and you bet it won't be the last book by Shana Galen I'll read.

Why should you read it:
It's a delightful Historical Romance