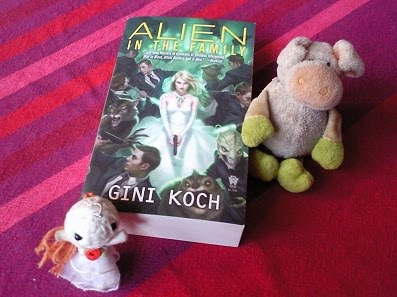 Alien in the Family (Katherine "Kitty" Katt #3) by Gini Koch

What is it about:
Super-Being Exterminator Kitty Katt and the Alpha Centaurian she loves, Jeff Martini, should be finalizing their wedding plans. But that was before she discovers Jeff is in line to become Emperor back on his home world. Kitty knows she is everything a royal family wouldn't approve of, and is bracing herself for the worst. As it turns out, the royal family is just the beginning. Especially when extraterrestrial Amazonian terrorists are determined to start and end Kitty and Jeff's nuptial festivities with a bang.

What did me and Voodoo Bride think of it:
Yet another awesome addition to a terrific series.
Reading Alien in the Family gives you the full range of emotions from laughing out loud to sniffling softly and from grumbling in frustration to cheering on our heroes. It's a super fun, full action adventure with romance, aliens, politics and above all Kitty and Martini! All our favourite characters are present in this book and Koch even managed to add new characters and creatures who are so cool, we're hoping we'll see them return in future books. Koch's writing style is pleasant and fast and that alone would make this book a pleasure to read, so combined with the awesome story it makes this book highly rereadable and I can safely say we will indeed reread this book often.
So in short: Alien in the Family rocks!

Why should you read it:
According to me: It's a fun, action filled story
According to Voodoo Bride: It's got swoonworthy aliens, especially Martini.

Sounds like another win from Gini. can't wait to get my hands on it!

It was fab wasn't it.. LOVED it

I have Touched by an Alien in my TBR pile but haven't started it yet...sounds like I've got a great series ahead of me! :)

Thanks everyone.
I love this series
@Mel: even if you only love it half as much as I do you'll enjoy this series.

I completely agree. This one rocked so much! *g*
Can't wait to get more.

I am so looking forward to the wedding in this book yet I am very worried at the same time. Can't wait until my copy arrives. :)

I can't wait for my copy to arrive! Thanks for the peek and review!!