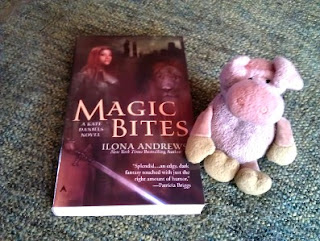 What is it about:
When the magic is up, rogue mages cast their spells and monsters appear, while guns refuse to fire and cars fail to start. But then technology returns, and the magic recedes as unpredictably as it arose, leaving all kinds of paranormal problems in its wake.

Kate Daniels is a down-on-her-luck mercenary who makes her living cleaning up these magical problems. But when Kate's guardian is murdered, her quest for justice draws her into a power struggle between two strong factions within Atlanta's magic circles.

The Masters of the Dead, necromancers who can control vampires, and the Pack, a paramilitary clan of shapechangers, blame each other for a series of bizarre killings—and the death of Kate's guardian may be part of the same mystery. Pressured by both sides to find the killer, Kate realizes she's way out of her league—but she wouldn't have it any other way…

I must say I didn't really connect with Kate, there wasn't enough told about her and her past to understand who and what she is. And I'm not even talking about how inconsistent she was with her own rules. The story and the world building however were intriguing enough to deal with a heroine who felt a bit one dimensional to me.

There were some really cool other characters who felt a bit more real to me. I really liked Curran, the Lord of the Beasts and Jim, another shapechanger.

The story is cool and action packed. There were some minor annoyances like people throwing out whole theories just because one small part of it didn't seem to fit, but overall it was an entertaining read.

I'm not completely sold on this series I'll confess, but I might give other books in this series a chance if I come across them. To be honest I like Ilona Andrews' Edge series more than this series so far.

Why should you read it:
It's a nice Urban Fantasy with an intriguing setting.

I'm the opposite, I prefer this series to the Edge books. But I agree about this book not being the greatest, it was intriguing but didn't blow my socks off. The series gets better with each book though. :)

This was their first book and I think the unevenness comes from that. The Edge books came much later, after they'd done quite a few of the Kate Daniels books. This is one series that does get better over time. (Though Kate tends to stay pretty one-dimensional.)

I always heard great things about this series, sorry to know it didn't work well for you, Sullivan. I do hope you find the right connection with the next instalment (if you get the chance to read it), I will definitely give it a go at some point. :)

This is a series that definitely gets better and better as the books go on. I love the Edge series as well, and I think those books ended up being so good to me because they had the benefit of the early books in this series coming first.

Sounds like i really should give book two a try soon.

I confess, I didn't much care for this book. I say read the next. By the third you will love the characters. I was hooked by the end of the second, but the third did me in. I was a fan for life. :)

I agree with Melissa Sullivan, and if we lived closer together, you could always borrow my books. The first is not the best in the series, they do improve. I also love the Edge series a lot, but that is a whole different writing style.

aaaaaaaaaaaaaah noooooo! My dear you have to love this series! It's so good!!! It's one of my fav!

lol now I confess you're right too I remember that I was disappointed to not have more revelations about the world. But after this one it was perfect for me.

Okay, I have to chime in once more, to tell this story:
I read this series when I bought the first two from Ilona at an RT convention. She's very funny. She had stacks of the second book, which she signed for me. I wanted to know where the first book was. She said, in her Russian accent, "You don't want that - it's no good." I insisted, I wanted to read them in order. So she reached under the table and pulled it out. Then she flipped through the first twenty or so pages and folded down the corner. "If you must read it," she said, "promise me you will start here. Don't read anything before that."

Wow, so many people who love this series. I promise I'll put book 2 high on my wishlist.