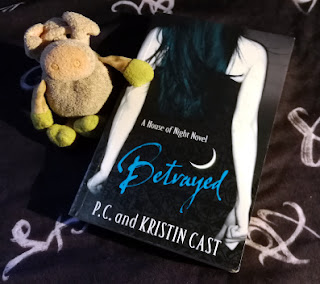 Betrayed (House of Night #2)
by P.C. Cast and Kristin Cast

What is it about:
Zoey, High Priestess in training, has managed to settle in at the House of Night and come to terms with the vast powers the Vampyre Goddess Nyx has given her. Just as she finally feels she belongs, the unthinkable happens: human teenagers are being killed, and all evidence points to the House of Night. While danger stalks the humans from Zoey’s old life, she begins to realize that the very powers that make her so unique might also threaten those she loves.

What did I think of it:
A long long time ago, apparently before I started my review blog, I read the first book in this series, but didn't get the next book after that. I found book 2 to 10 at the charity bookstore recently though, and decided to buy them.

And this is a nice read.

I will confess I think Zoey is a bit too judgmental at times, and unfairly so. She calls people sluts for dressing sexy and for taking things a bit further than just making out in a relationship, even though she herself is thinking about dating three different guys. But as long as she doesn't dress sexy she's no slut herself of course!

That aside: I had fun with this book. There's teen angsting, drama, boarding school stuff, and a nice little mystery. Zoey and her friends are a walking cliche at times, but not too annoyingly so. The story is entertaining enough to stick with it. The ending leaves enough open to be curious what's next. I at least have 8 more books to see where things will go.

All in all an enjoyable read. I will try the next book soon.

Why should you read it:
It's an entertaining Paranormal YA read.