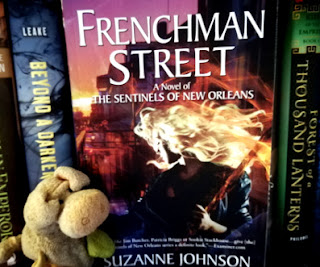 What is it about:
The uneasy truce between the preternatural species of New Orleans has shattered, with wizards and elves, shifters and vampires—not to mention the historical undead—struggling for ultimate control of the city, including the humans who still think they’re atop the food chain.

They aren’t, however—and the Summer Prince of Faerie wants them to know it.

Stuck in the middle? One unemployed wizard sentinel. For DJ Jaco, war makes for strange bedfellows as she finally embraces her wizard-elven heritage and strikes a deal with the devil so she and her ragtag band of allies can return to defend her hometown. After all, when the undead French pirate Jean Lafitte has been hired by the mayor as a consultant, things could go horribly wrong.

War is coming to New Orleans just in time for Mardi Gras, with the elves and wizards lined up on opposite sides, the shifters without a leader, the vampires promising loyalty to the highest bidder, and the soul of the Crescent City resting on the outcome of the civil war going on in Faerie between the rival princes of summer and winter.

Mardi Gras Day is approaching fast, the much-anticipated new Krewe of Enyo is not what it seems, and the line between friends and enemies grows thin as DJ tries to stave off open warfare between faeries on the St. Charles Avenue parade route.

Laissez les bons temps rouler…but be careful, or the good times might roll too close for comfort.

What did I think of it:
I have enjoyed this series from the start, so I had to get my trotters on this book as soon as it was available in print, to see how this series would end.

And what an ending!

DJ and her friends are trying to stop a war. Lines have to be drawn, sides have to be chosen, difficult decisions have to be made. And everyone knows that a war has casualties.

This book is one hell of an emotional ride. Just as DJ is recovering from one blow, the next is dealt. It is good she at least has some loyal friends at her side.

Rand once again is playing a big role, and I just can't forgive him for things he has done in the past, so I was anxious. I didn't want DJ to fall under his spell. Both me and Voodoo Bride were rooting for a certain someone else to win DJ's heart once and for all. You'll have to read this book to see if we got our wish.

There is lots of action, subterfuge, and danger. Jean was the comical note at times, as always taking the things people say too literal. I will say one thing: that pirate really grew on me. After book one I hadn't suspected to ever like him.

All in all this book is a wonderful, emotional, and satisfying conclusion to this series. Even so: it seems Suzanne Johnson will write a novella set in this world. You bet I'll be reading that as well as rereading this awesome series.

Why should you read it:
It's an awesome UF read.

i LOVED this book!! but i'm sure happy thatr we will get more in this universe in the future
thank for for this great review

Nice review. Great book. I recommend this series whenever I can.

I agree that Frenchman Street is a terrific read and yes, Jean Lafitte does grow on you. He needs his own book!