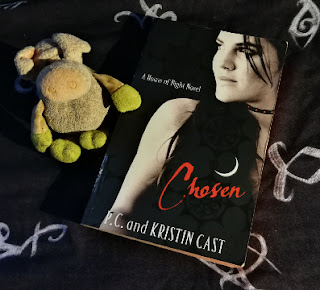 Chosen (House of Night #3)
by P.C. Cast and Kristin Cast

What did I think of it:
Dark forces are at work at the House of Night and Zoey Redbird’s adventures at the school take a mysterious turn.

Her best friend, Stevie Rae, is undead and struggling to maintain a grip on her humanity. Zoey finds herself in the very unexpected and rare situation of having three boyfriends. Mix a little bloodlust into the equation and the situation has the potential to spell social disaster.

Just when it seems things couldn’t get any tougher, vampyres start turning up dead. Really dead. It looks like the People of Faith are tired of living side-by-side with vampyres. But, as Zoey and her friends so often find out, how things appear rarely affects the truth…

What did I think of it:
I'm starting to dislike Zoey more and more with each book. She's immature, judgmental, and her vocabulary is super annoying.

That being said: the story is quite entertaining. There are things you can see coming from miles away. I mean: yes, there was one love interest I thought was the most interesting, but I also knew he was too good to be true, as it turns out of course. Still these books are fun to read when you're in the mood for something uncomplicated.

All in all the entertainment value is still higher than my annoynce of Zoey and her brown pop, so I'll pick up the next book soon.

Why should you read it:
It's an enjoyable Paranormal YA read.