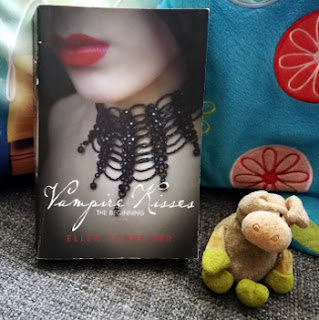 What is it about:
For goth-girl Raven, dating her dream boyfriend is complicated, especially because Alexander's secret means that they can see each other only at night.

And now the pair must be extra wary in the dark with Alexander's archrival, Jagger, appearing around town. As if Jagger isn't enough cause for worry, Luna, his strikingly pale sister, has also surfaced and seems to have her sights set on Raven's longtime nemesis, Trevor. Together, Raven and Alexander must begin a terrifying search for Jagger and Luna's hideout to drive them away -- that is, if it's not already too late to save Dullsville from becoming Vampireville.

In the latest installment of her popular Vampire Kisses books, Ellen Schreiber continues the startling story of two teen outsiders -- she from the mortal world and he from the Underworld -- who share a thrilling, extraordinary romance.

What did I think of it:
It might be just me, but I have the feeling Raven is getting more reckless and unthinking as this series goes on. Although this is once again an enjoyable read, Raven is doing things that made me want to kick her.Yes, she and others might once again be in danger, but she is taking stupid risks.

Alexander isn't always the brightest either, so together they might be steering themselves right towards a shipwreck. I will also confess I miss Becky. In the first book Becky was there to help out Raven and to control her wilder impulses at times, but since Becky got a boyfriend she only has small walk-on roles. If I continue reading this series, I really hope Becky will get bigger roles again.

Of the three books I read so far, this one is my least favorite. Maybe I'm having series fatigue though, and that explains my feelings about this book. If I happen to run into more books of this series at a discount, I might read more, but I won't hunt them down.

Why should you read it:
It's an entertaining and enjoyable YA read.