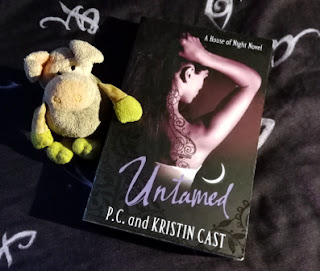 Untamed (House of Night #4)
by P.C. Cast and Kristin Cast

What is it about:
As if it's not enough to lose her friends and all three boyfriends, Zoey Redbird, the most powerful fledgling the Vampyre world has ever seen, knows that great trouble is coming to the House of Night.

Despite her nightmares, Zoey finds herself distracted by the new kid Stark, brought to the House by Neferet, who clearly has something she wants from him. There's something between Stark and Zoey that she never imagined - but disaster is awaiting them all, and she doesn't know if she can fight the approaching evil alone any more...

What did I think of it:
It probably says something about me that I like Aphrodite (who was the big bad girl in book 1) the best of all the characters. But over the last few books she has been slowly becoming friends with Zoey. I do hope she will keep her edge.

As always Zoey is slutshaming and judging people left and right, while she is already on the lookout for a new boy toy herself, sipping her brown pop. That being said: I think this is the best book so far. The slow going plotline that meandered through the first three books is finally gathering speed and serious danger is coming for The House of Night.

With Aphrodite taking charge at times Zoey and her friends are acting smart in this book. I liked that Zoey's grandmother wasn't so judgy as Zoey towards Aphrodite, and that there seems to be a cool love interest for Aphrodite as well. As for Zoey: her taste in men seems to be 'as many as possible' so we will see what's next in her love life soon I suspect.

All in all yet again an entertaining read. I'll be picking up the next book soon.

Why should you read it:
It's a very entertaining Paranormal YA read.