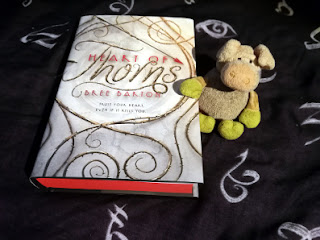 What is it about:
In the ancient river kingdom, where touch is a battlefield and bodies the instruments of war, Mia Rose has pledged her life to hunting Gwyrach: women who can manipulate flesh, bones, breath, and blood. The same women who killed her mother without a single scratch.

But when Mia's father announces an alliance with the royal family, she is forced to trade in her knives and trousers for a sumptuous silk gown. Determined to forge her own path forward, Mia plots a daring escape, but could never predict the greatest betrayal of all: her own body. Mia possesses the very magic she has sworn to destroy.

Now, as she untangles the secrets of her past, Mia must learn to trust her heart...even if it kills her.

What did I think of it:
So the pictured book is the special FairyLoot edition with sprayed pages.

This is a really beautiful Fantasy read.

Mia's mother was killed by a Gwyrach and ever since she has been training with her father's hunters to become a Gwyrach hunter as well. She is determined to find her mother's killer. But then her father wants her to marry the son of the king.

She wants to escape together with her sister, but that's when things go wrong: she discovers she is a Gwyrach herself, and soon she is on the run together with the prince she almost wed. As they tumble from one problem into the next Mia learns that a lot of what she's been told isn't true, and on top of that she will have to learn how to control her new found abilities.

I loved both the story and the world building. Even though a lot of characters were a bit black and white there were also some more ambiguous characters. I especially liked the prince and Mia's father. Mia herself does a rather quick turnabout once she discovers she has magic, but the story was cool enough that this didn't annoy me.

Near the end of the book there are some unexpected developments that racked up the suspense, and the climax of the story left me flabbergasted in a good way. You bet I'll keep an eye out for the sequel, because I need to know what will happen next.