Down Among the Sticks and Bones - Book Review 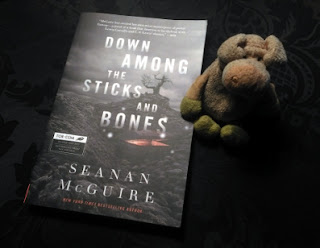 What is it about:
Twin sisters Jack and Jill were seventeen when they found their way home and were packed off to Eleanor West’s Home for Wayward Children.

This is the story of what happened first…

Jillian was her father’s perfect daughter—adventurous, thrill-seeking, and a bit of a tom-boy. He really would have preferred a son, but you work with what you've got.

They were five when they learned that grown-ups can’t be trusted.

They were twelve when they walked down the impossible staircase and discovered that the pretense of love can never be enough to prepare you a life filled with magic in a land filled with mad scientists and death and choices.

What did I think of it:
After I read all the short stories nominated for the Hugo Awards I wanted to start on the novellas. One of the nominated novellas was by Seanan McGuire: Beneath the Sugar Sky. It's the third book in a series, and I happened to have book two -Down Among the Sticks and Bones- in my TBR pile. As I already planned to read it before August I decided to pick it up before starting on Beneath the Sugar Sky.

Once I started on this book I couldn't put it down until I finished it!

Jack and Jill are twin sisters and born to parents who never should have had children. The two of them are molded into the form their parents want them to take until the day they find a door to another world. Once there they get to make their own choices, but with choices come consequences, and it's up to them to see what they can live with.

I very much enjoyed this story. Next to being a suspenseful story about traveling to a universe that seemed equal parts Dracula and Frankenstein it has a lot of hidden depths. It's about conformity and discovering who you are or want to be. I couldn't help cheering both girls on to find their way.

I started out liking both of them, but as the story unfolded my feelings shifted and soon I was cheering on only one of them, while hoping the other would stray from the path she had chosen. The ending was bittersweet and made me hungry for more. I knew that moving on to book three wouldn't be enough and that I had to read the whole series, so you bet I got my trotters on a digital copy of book one.

*This story is readable as a standalone and although it's the second book in the series, it is a prequel to the first book*

Why should you read it:
It's a really cool Young Adult Fantasy read.