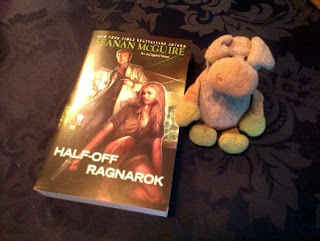 What is it about:
Endangered, adjective: Threatened with extinction or immediate harm.
Australia, noun: A good place to become endangered.

Alexander Price has survived gorgons, basilisks, and his own family—no small feat, considering that his family includes two telepaths, a reanimated corpse, and a colony of talking, pantheistic mice. Still, he’s starting to feel like he’s got the hang of things…at least until his girlfriend, Shelby Tanner, shows up asking pointed questions about werewolves and the state of his passport. From there, it’s just a hop, skip, and a jump to Australia, a continent filled with new challenges, new dangers, and yes, rival cryptozoologists who don’t like their “visiting expert” very much.

Australia is a cryptozoologist’s dream, filled with unique species and unique challenges. Unfortunately, it’s also filled with Shelby’s family, who aren’t delighted by the length of her stay in America. And then there are the werewolves to consider: infected killing machines who would like nothing more than to claim the continent as their own. The continent which currently includes Alex.

Survival is hard enough when you’re on familiar ground. Alex Price is very far from home, but there’s one thing he knows for sure: he’s not going down without a fight.

What did I think of it:
This is such a fun series!

This book is a great addition and made me fall even more in love with the Aeslin mice. Alexander and Shelby travel to Australia to help Shelby's family with a werewolf problem, but they might be in over their heads.

I loved discovering how werewolves work in this universe, and they are among the creepiest werewolves I've come across. I also liked seeing another cryptozoologist organisation at work. There were some interesting characters, and some very annoying ones as well. I was once again hooked from the start.

There are some dicey situations in this book and I must say I worried how things would turn out. Alex being out of his element and surrounded by people who refuse to listen to him, made things even more suspenseful.

All in all a great read and I'm eager to continue this series. I have the next full novel lined up already, but will first read some more shorter stories that precede that book.

Why should you read it:
It's a fun UF series with cool mythology!

so glad you keep enjoying the series^^