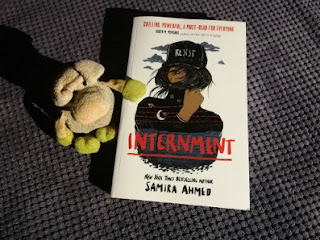 What is it about:
Rebellions are built on hope.

Set in a horrifying near-future United States, seventeen-year-old Layla Amin and her parents are forced into an internment camp for Muslim American citizens.

With the help of newly made friends also trapped within the internment camp, her boyfriend on the outside, and an unexpected alliance, Layla begins a journey to fight for freedom, leading a revolution against the internment camp's Director and his guards.

Heart-racing and emotional, Internment challenges readers to fight complicit silence that exists in our society today.

What did I think of it:
I'm surprised this book didn't show up on my social media feeds or the blogs I follow before I ran into it in a bookstore. It seems to me that this book should be everywhere so that even the people who'd never pick up a read like this can't get around it.

This story is set in the near future and large parts of this story feel frighteningly real. It's easy to picture this happening with the current political climate everywhere. There were some things I think that could have handled differently though. The Director of the camp is a grotesque caricature and it was difficult to imagine anyone in higher command would let him run the camp, but maybe I'm wrong, seeing as there are grotesque caricatures in charge of even bigger things at the moment.

That aside I was invested in this story and was rooting for Layla to find a way to make herself and others heard. To fight the system, to find allies outside of the camp, and to bring hope to all. Layla is aware of the stakes, although at times she is rash and does things without thinking. She manages to find people who want to help even as others try to silence her out of fear or hate.

All in all a thought-provoking read. I don't think I'll reread it, but I will give it to others to read.

Why should you read it:
It's a thought-provoking YA read.