I''m reading the Incryptid series and a friend told me there are tons of short stories on Seanan McGuire's website you can download for free. So I had a look and decided to read these stories before diving into the next novel. Today my (short) thoughts on the first two short stories. 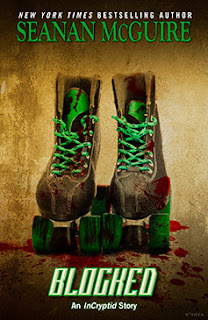 What is it about:
Antimony Price likes her life. She likes her high school, she likes her friends—even if none of them really know her as anything more than another face in the halls—and most of all, she likes her place on the cheerleading squad, where she understands what's expected of her, and delivers with grace, style, and a viciousness that has done a lot for her team's reputation.

Too bad it's time to graduate.

Now adrift in a world that doesn't have the rules she's used to or the protections she had worked so hard to shape, Antimony has to find something else to keep herself busy...and her cousin, Elsinore, has a few ideas about what that something might be.

It's time for Antimony to meet the wide, wonderful world of roller derby. Let's hope that she survives the experience—and that everyone else survives her.

What did I think of it:
A nice story if you are already reading this series. It gives inside in Antimony's character and made me eager to learn even more about her. I still have to read some other books before I get to Antimony's books though. 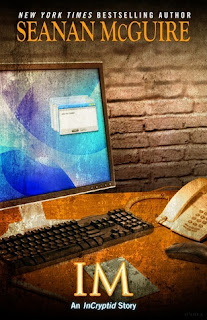 What is it about:
Arthur Harrington's situation is...special, thanks to having an incubus for a father and a semi-stable grasp of his "special powers" (if you can call them that). As a consequence, he's always been allowed to stay somewhat sheltered from the family business, communicating with the outside world largely via the computer and his cousins.

Then Sarah got hurt. He's been climbing the walls ever since, trying to think of something he can do to help—but when no one really understands the way a cuckoo's mind works, what can he possibly do to make things better? Especially when she's in Ohio and he's in Oregon?

What did I think of it:
A very short story, but it is good to read for fans of Sarah. Nice little scene that gives hope for upcoming books.