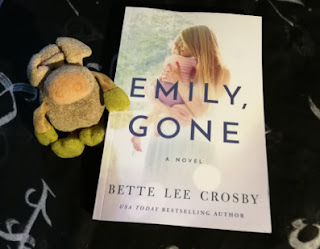 What is it about:
A missing child sets the lives of three women on a collision course in this powerful and compelling novel by USA Today bestselling author Bette Lee Crosby.

When a music festival rolls through the sleepy town of Hesterville, Georgia, the Dixon family’s lives are forever changed. On the final night, a storm muffles the sound of the blaring music, and Rachel tucks her baby into bed before falling into a deep sleep. So deep, she doesn’t hear the kitchen door opening. When she and her husband wake up in the morning, the crib is empty. Emily is gone.

Vicki Robart is one of the thousands at the festival, but she’s not feeling the music. She’s feeling the emptiness over the loss of her own baby several months before. When she leaves the festival and is faced with an opportunity to fill that void, she is driven to an act of desperation that will forever bind the lives of three women.

When the truth of what actually happened that fateful night is finally exposed, shattering the lives they’ve built, will they be able to pick up the pieces to put their families back together again?

What did I think of it:
I picked this book up because it was the monthly read for May for the Contemporary/Women's Fiction book-club I joined (which I joined to challenge myself to read more Contemporary Fiction).

Let me say this was a nice enough read for me, but it is probably better enjoyed by people who mainly read Contemporary Fiction. My review should be taken as a review by someone who does not know the genre very well, and who usually reads and enjoys SFF more than Contemporary stuff.

I enjoyed the first half of the book with only some minor grumblings. These grumblings had mainly to do with how marijuana was talked about. I'm a curious and exploring piggy, so in my wilder years I have smoked and eaten my share of weed. What was described here as the effects of smoking it, sounded more like someone was mixing several substances together, because it certainly wasn't the effects of just several joints. And yes: that seriously annoyed me. I'm not saying: smoke away! But I am saying: do your research.

Anyway: apart from that the first half was enjoyable enough. It was the second pat of the book that had me blinking and questioning the probability of the events and the sanity of the characters. Maybe what happens in the second half of this book is pretty standard fare for the genre, but I was unable to suspend disbelief, and I read lots of Zombie books! This made that I lost interest in the story and slogged myself to the end of it. I myself would have written a very different ending, but then again, my story would have those aforementioned zombies.

All in all I think this book just wasn't meant for readers like me, but if you love Contemporary Fiction it's probably a good fit for you.

Why should you read it:
It's enjoyable Contemporary Fiction.