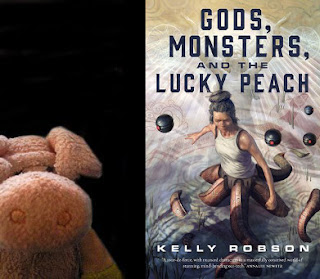 Gods, Monsters, and the Lucky Peach
by Kelly Robson

What is it about:
Discover a shifting history of adventure as humanity clashes over whether to repair their ruined planet or luxuriate in a less tainted past.

In 2267, Earth has just begun to recover from worldwide ecological disasters. Minh is part of the generation that first moved back up to the surface of the Earth from the underground hells, to reclaim humanity's ancestral habitat. She's spent her entire life restoring river ecosystems, but lately the kind of long-term restoration projects Minh works on have been stalled due to the invention of time travel. When she gets the opportunity take a team to 2000 BC to survey the Tigris and Euphrates rivers, she jumps at the chance to uncover the secrets of the shadowy think tank that controls time travel technology.

What did I think of it:
I have wanted to read this book for a while, but never got to it, so my attempts to read some of the Hugo nominations was a good excuse to finally pick it up.

And this is such a great story!

Maybe you know I have a weakness for time travel stories, but that I'm often disappointed or frustrated by the flaws or logical errors in those stories. This story did everything right in my opinion. I loved the time travel theory that was used here, I loved how Robson applied it to the story, and I could actually believe it would work like this. Just for that this novella deserves praise!

But that's not the only praise it gets! I also loved the characters, the world building, and the story. That Minh has tentacles for legs was just the yummy icing on an already delicious cake. I was hooked from the start and wanted to find out more about this future, Minh, her coworkers, and if they could pull off the project they set themselves.

There's more I want to tell you, because it was so cool in my opinion, but that would lead into spoiler territory, so I'll just say I recommend this novella to everyone who loves a well thought-out time travel story.

I'll be investigating what other stories Robson wrote.

Why should you read it:
It's a really cool Time Travel story.