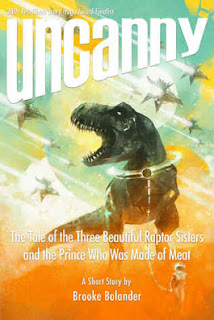 Being a member of Worldcon 2019 I get to vote in the Hugo Awards. And as a lot of th authors and publishers were kind enough to provide digital copies of nominated books and stories I decided to try to read some of the books and stories I didn't read yet so I can actually vote for what I think is the best story instead of just voting for the one I recognize.

I started with the short stories. All of them were provided in the Hugo package, so I read all of them and will list them below with my thoughts and how I voted.

“The Court Magician,” by Sarah Pinsker (Lightspeed, January 2018)
This story was nice enough, but didn't really draw me in.
It ended up in 3rd place for me.

“The Rose MacGregor Drinking and Admiration Society,” by T. Kingfisher (Uncanny Magazine 25, November-December 2018)
Mythical seducers whine over a mortal woman and get drunk. Not my kind of story. 5th place.

“The Secret Lives of the Nine Negro Teeth of George Washington,” by P. Djèlí Clark (Fireside Magazine, February 2018)
Alternate universe. Very much enjoyed this one. There were some really intriguing characters and I wouldn't mind to learn more about some of them. 2nd place.

“STET,” by Sarah Gailey (Fireside Magazine, October 2018)
This one really annoyed me and hit on some personal pet peeves. 6th place.

“The Tale of the Three Beautiful Raptor Sisters, and the Prince Who Was Made of Meat,” by Brooke Bolander (Uncanny Magazine 23, July-August 2018)
A fairy tale as told by a dinosaur. Totally my kind of story: dinosaurs, a smart princess, and the dinosaurs get their snacks. We have a winner. 1st place.

“A Witch’s Guide to Escape: A Practical Compendium of Portal Fantasies,” by Alix E. Harrow (Apex Magazine, February 2018)
Although the idea behind this story was interesting, I didn't much care for the lead character, so it was Meh... 4th place.

Next I'll try to get the novelettes and novellas read.