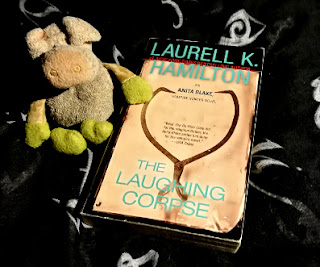 What is it about:
Harold Gaynor offers Anita Blake a million dollars to raise a 300-year-old zombie. Knowing it means a human sacrifice will be necessary, Anita turns him down. But when dead bodies start turning up, she realizes that someone else has raised Harold's zombie--and that the zombie is a killer. Anita pits her power against the zombie and the voodoo priestess who controls it.

In The Laughing Corpse Anita will learn that there are some secrets better left buried-and some people better off dead...

What did I think of it:
I still don't like Anita. One remark from Anita in this book about "bleeding heart liberals" even made me despise her. Still the story was once again entertaining enough to keep me reading. And I'm also promised Anita will grow as a character over the next few books. I can't wait!

So I grumbled under my breath about Anita and focused on the story. It's pretty straightforwards and not a lot of guessing, but there was enough cool action and even a bit of zombie mayhem to keep me entertained.

All in all an enjoyable read, so I'll pick up book three one of these days and see if Anita will indeed grow as a character or at least grow on me.

Why should you read it:
It's a nice UF read.