Across the Universe - Book Review 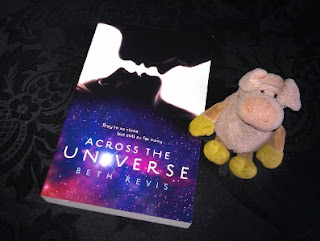 What is it about:
Seventeen-year-old Amy joins her parents as frozen cargo aboard the vast spaceship Godspeed and expects to awaken on a new planet, three hundred years in the future. Never could she have known that her frozen slumber would come to an end fifty years too soon and that she would be thrust into the brave new world of a spaceship that lives by its own rules.

Amy quickly realizes that her awakening was no mere computer malfunction. Someone-one of the few thousand inhabitants of the spaceship-tried to kill her. And if Amy doesn't do something soon, her parents will be next.

Now Amy must race to unlock Godspeed's hidden secrets. But out of her list of murder suspects, there's only one who matters: Elder, the future leader of the ship and the love she could never have seen coming.

What did I think of it:
This is a very nice read.

The setting was really intriguing:
The spaceship Godspeed has been travelling for 250 years and in that time there have been several generations of people on board the ship who have created their own society. This lend itself really well for a suspenseful story.

I liked Elder, he's smart, trying to do what's right, but because he's been kept in the dark about a lot of things he makes mistakes. I could really understand his motivations and the frustration that he feels from time to time.

Amy was harder to like. I will confess that at the start of the story she seemed to act too young for her age. Then she wakes up on Godspeed and she starts acting a bit bratty and unthinking as well. I wanted to kick her from time to time.

The story was enjoyable and intriguing. I did have my suspisions about what was going on and it turned out I was right about some of them, but wrong about some others.

All in all this is a really fun read and I will most certainly give the next book in this trilogy a try as well.

Why should you read it:
It's an enjoyable YA SciFi read.