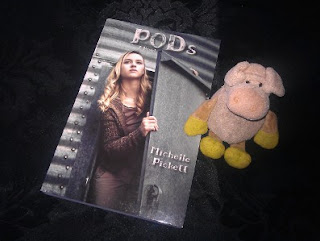 What is it about:
Seventeen-year-old Eva is a chosen one. Chosen to live, while others meet a swift and painful death from an incurable virus so lethal, a person is dead within days of symptoms emerging. In the POD system, a series of underground habitats built by the government, she waits with the other chosen for the deadly virus to claim those above. Separated from family and friends, it's in the PODs she meets David. And while true love might not conquer all, it's a balm for the broken soul.

After a year, scientists believe the population has died, and without living hosts, so has the virus. That's the theory, anyway. But when the PODs are opened, survivors find the surface holds a vicious secret. The virus mutated, infecting those left top-side and creating... monsters.

Eva and David hide from the infected in the abandoned PODs. Together they try to build a life--a new beginning. But the infected follow and are relentless in their attacks. Leaving Eva and David to fight for survival, and pray for a cure.

What did I think of it:
I've been looking forward to reading this book ever since I first heard about it over a year ago. Then I was greatly disappointed when I discovered it released in June 2013 instead of June 2012 as I thought. And then I was disappointed again when on release day my preordered copy wasn't available and I had to wait even longer for the book to arrive.

But it finally arrived and this is what greeted me when I opened the book: 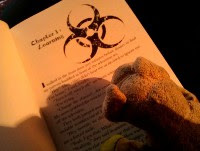 I will confess PODs deserved a place on my keeper shelves right at that moment just for how it looked alone.

And then I started reading and it earned its place on my keeper shelves a second time.

I will confess I had expected a different story. I had thought that the time in the PODs would be glossed over and that the story would only really kick off when Eva leaves the PODs. Instead there's a lot of time spend on Eva being brought to the POD and on the stay in the POD intself. Ony later in the book do Eva and the others leave the POD and discover what's waiting for them outside.

Did I care that I wasn't immediately thrust into scenes where Eva has to fight infected mutants? No!

Pickett did a wonderful job in setting the mood for this story and showing us how Eva and her POD-mates handle the time in the POD. I was engrossed in the story from the start. There were some things that I found a little unbelievable or that weren't really thought through in my opinion, but the story was so intriguing that I was able to suspend disbelieve and let myself go along with it.

All in all I really enjoyed this story and it was well worth the wait. Although it can be read as a standalone (no nasty cliffhangers) there's going to be a sequel and you can bet on it that I'll be getting hold of it.

Why should you read it:
It's a cool Post Apocalyptic YA

I am glad you loved it so much Sullivan!

It was so much better than I feared after reading some of the other reviews.