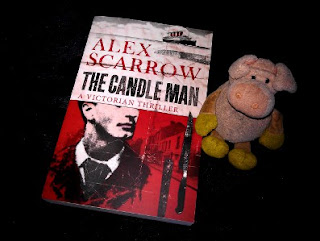 The Candle Man
by Alex Scarrow

What is it about:
1912. Locked in an eerily quiet dining room on the Titanic, a mysterious man tells a young girl his life story as the ship begins to sink. It all starts in Whitechapel, London in 1888...

In the small hours of the night in a darkened Whitechapel alley, young Mary Kelly stumbles upon a man who has been seriously injured and is almost unconscious in the gutter. Mary - down on her luck and desperate to survive - steals his bag and runs off into the night.
Two days later, an American gentleman wakes in a hospital bed with no memory of who he is or how he got there. He has suffered a serious head injury, and with no one to help him remember who he is he starts to wonder how he will ever find his way home.
One terrible truth links these two lost souls in the dark world of Victorian London - a truth that could ruin the name of the most influential man in the land...

Back in 1912, as the Titanic begins its final shuddering descent to the bottom of the frozen, black Atlantic, the truth behind a series of murders that have hung like a dark fog over London for more than two decades is about to be revealed... the identity of Jack the Ripper.

What did I think of it:
Warning: this is a rant with spoilers!

I picked this book up because I expected a story that intertwines the story of Jack the Ripper with The Titanic.

I knew this story would be mostly about Jack the Ripper, but expected that the Titanic would play a crucial role at least, seeing how the Titanic is repeatedly mentioned in the back cover story and is featured on the cover illustration.

There a prologue and epilogue that are set on Titanic where an old man is telling a story to a young woman and that story is: this book.

The old man and the young woman could just as easily have been sitting in a museum, a pub, a train, a... you get my point.

Worse:
The prologue and epilogue could have just as well been left out and no one would have noticed.

Don't you hate it when something like The Titanic is used as a selling point when all it is in reality is window dressing? It's clear the Titanic is only mentioned on the cover to sell more books.

As for the Jack the Ripper story this book actually is about:

It's a decent story with some original ideas, but I was disappointed to discover the author went for one of the most used conspiracy theories about Jack the Ripper. I would have liked this book better if the author had actually tried to give his own theory instead of using a theory that's been done to death.

Why should you read it:
If you want to read a story about Jack the Ripper this might be a book for you. Just don't get your hopes up about the role of The Titanic.

Why do I enjoy your ranty reviews so much more than your positive ones, Sully? ;-)

I think you're spot-on with your critique. In general, if something is not essential to a story, then it should be taken out. In the case of the Titanic, which can draw readers who would normally not try this story, the bait-and-switch is extra unfair.

Because my frowny expression makes my rants more believable than my raves? :-p

And next time I see the Titanic on a book I'll be more careful....

That is really misleading. I did read a totally believable Jack the Ripper story in the historical cozy mysteries by Robin Paige. I usually don't want to read about him, but this I enjoyed.