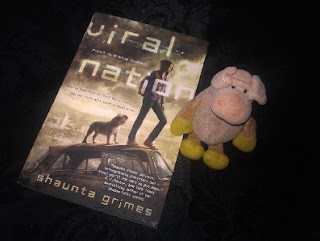 What is it about:
After a virus claimed nearly the entire global population, the world changed. The United States splintered into fifty walled cities where the surviving citizens clustered to start over. The Company, which ended the plague by bringing a life-saving vaccine back from the future, controls everything. They ration the scant food and supplies through a lottery system, mandate daily doses of virus suppressant, and even monitor future timelines to stop crimes before they can be committed.

Brilliant but autistic, sixteen-year-old Clover Donovan has always dreamed of studying at the Waverly-Stead Academy. Her brother and caretaker, West, has done everything in his power to make her dream a reality. But Clover’s refusal to part with her beloved service dog denies her entry into the school. Instead, she is drafted into the Time Mariners, a team of Company operatives who travel through time to gather news about the future.

When one of Clover’s missions reveals that West’s life is in danger, the Donovans are shattered. To change West’s fate, they’ll have to take on the mysterious Company. But as its secrets are revealed, they realize that the Company’s rule may not be as benevolent as it seems. In saving her brother, Clover will face a more powerful force than she ever imagined… and will team up with a band of fellow misfits and outsiders to incite a revolution that will change their destinies forever.

What did I think of it:
I totally bought this book for its cover I will confess. That it sounded like a cool Dystopian/Post Apocalyptic YA was an added bonus.

I will confess I totally skipped over the time travel mentions when reading the cover story.

Viral Nation's time travel theory and the execution didn't make sense in my opinion. I kept wondering why those who knew how the time travel worked, acted like they did. Their actions and motives didn't ring true when held against the theory used. And the theory itself wasn't rock solid either by the way.

I know this is a very personal pet peeve and that I'm often too strict towards time travel stories, so I really tried to look past the time travel stuff and to just enjoy the story.

And that's hard when time travel is such an important part of the plot!

But to be fair:
I did enjoy Viral Nation for most parts. The characters, especially Clover and her brother West, were cool. I also did enjoy the world building outside of the time travelling and the story was suspenseful. So even with the annoyances about the time travelling this was a nice read.

I don't think I'll read any other books in this series though.

Why should you read it:
It's an enjoyable Dystopian/Time Travel YA read.