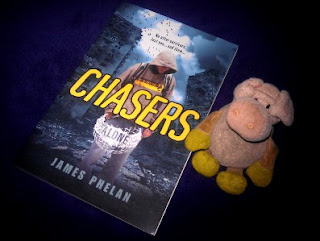 What is it about:
The trip of a lifetime just turned into the end of the world.

When Jesse crawls out of the wreckage of a subway car and emerges into daylight, he’s greeted by a living nightmare. An unexplained force has destroyed New York City, turning skyscrapers into ash, cutting off all power and communication. Jesse and his new friends, Dave, Anna and Mini are dazed but unhurt. The other survivors are not so lucky. Every human being they encounter is infected, gripped by an unquenchable thirst that drives them to monstrous acts of violence.

Somehow, Jesse has to escape. But first, he has to stay alive.

What did I think of it:
This is a cool post-apocalyptic read.

A group of teens from different countries are in New York on a UN sponsored trip when disaster strikes. Four of them survive the terrible subway crash and when they crawl from the wreckage they discover that the crash was the least of their problems.

The story is told by Jesse, a teen from Melbourne. He's a likeable character although he does have the tendency to joke at unfortunate moments in my opinion. The other three teens are really likeable as well and I was rooting for all of them to figure out what was going on and to stay alive.

Although there are a couple of action scenes where the teens get chased by the infected, mostly this story is about how they are trying to cope and survive. Because they don't run into other people it stays unclear what has happened and if it's just New York or if the whole world is affected. If there's one negative thing I can say it is that Jesse and his friends don't really worry about their family and friends, except for Dave who is from New York.

That aside this is a fast and cool read. I really enjoyed reading how Jesse and his friends react to what's happening around them and about their attempts to get information and to get to safety.

The ending was really cool as well and even though it's a bit of a cliffhanger, I think this book can also easily be read as a standalone. But as it's the first book in a trilogy you can bet I will get hold of the second book somewhere in the future.

Why should you read it:
It's a cool and enjoyable post-apocalyptic YA read.

I like the international aspect of the story. Glad you enjoyed it!