Today I bring you an interview with Gina X. Grant, author of The Reluctant Reaper.

She has an amazing giveaway for my readers as well, so stay tuned for the interview, more information about The Reluctant Reaper and a giveaway! 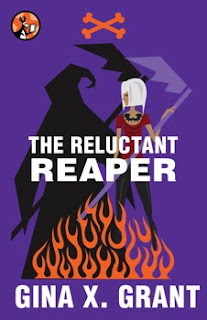 Welcome Gina.
Could you tell a bit about yourself for those people who don’t know you yet?

I’m a Canadian, a dog-rescuer, a funny writer (and also a writer of funny stuff), and generally a nice person. My dogs seem to like me. Especially at dinner time.

I began my writing life as a fanfictioneer back when we still accessed the World Wide Web, as it was then known, via stone tablets. Ten years later, I decided I could write as well as some of the bestsellers I was reading (damned by faint praise), and began to “file the serial numbers” off some of my longer fanfic.

In 2009, my first full-length novel, a gay romance titled Gym Dandy, was published. But not before being contracted and uncontracted and contracted again… It was ever thus in publishing, eh?

My hobbies? I read, I write, I walk the dogs. I watch a lot of TV and movies.


How many books will there be in the The Reluctant Reaper series?

Simon & Schuster contracted three books, so right now, it’s a trilogy. Book 4 is written but not yet shown to anyone. The first three books come out June, July and August of this year, so three books, no waiting!


Have you ever used people you know as characters in your books?

Since I cut my writerly teeth on fanfiction, I tend to draw more on the fictional characters I know and love. Does Victor sound like the Mountie from Due South? Does Kerrick sound like Mal from Firefly. Oops. Think of it as “real life once removed.” I’ve certainly used situations and dialogue that really happened—to me or to people I know.


Are there any other projects you’re working on or thinking about starting in the near future?

I’m about to send my agent the first book of a new series.

I’ve written Book 4 of the Reaper trilogy. (Hey, if Douglas Adams can have five books in his trilogy, so can I.)

And I’m poking away at a futuristic steampunk idea with lots of buckle in its swash.


Where can you be found when you’re not at your desk writing?

Every morning I’m out with my two rescued dogs, Billie and Stormy, in a beautiful, fairly wild park located in the centre of Toronto. 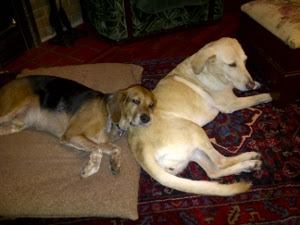 I wrote my second book.

To celebrate the release of THE RELUCTANT REAPER series, we’ll be having a family get together, possibly with champagne!

Telling people I’m a published author. And also? The writing. I love the writing process, especially the first draft. I’m a great and powerful wizard; dance, characters, dance, I say!


What authors have been an influence to you? And have you read any books lately that you want to share with us or have you been too busy with writing to read?

I read all the time, although I’m a sloooowww reader. For many years, I’ve tracked my reading in an Excel spreadsheet, then each year I choose one as my own personal, “Best Book of the Year!” So I know I read between 50 and 60 books a year, mostly fiction, with the occasional writing book or biography tossed in. So far this year, the lead contenders are Stephen Hunt for his Jackelian series, and Erin Morgenstern for Night Circus. Both very complicated plots with a dreamy, ethereal quality plus amazing world-building. I had a chance to hear Stephen Hunt speak recently; he was very informative and interesting.

My shelves were full of funny fantasy and absurdist humor. My first writing influence was probably Tom Robbins (not the motivational speaker, the humorist who wrote Even Cowgirls Get the Blues.) More recently, I’ve been hoarding, I mean reading, Janet Evanovich, Sir Terry Pratchett, Christopher Moore and Charlaine Harris.


Are there zombies or pigs in any of your books or will there be any in future books?

I can’t believe I just wrote four books about death and forgot to add a zombie. My bad. Looks like I’m going to have to write a fifth book, now.

In my planned steampunk book, there are definitely zombies. Like the really bad guys in Warm Bodies. I might have to watch that again as research.


Thanks for letting me play on your blog today.


It was fun having you here today!

Life for Kirsty d’Arc might not be perfect, but it’s far from hellish. She likes her job, has a great BFF and truly admires Conrad, her boss. But when she dives in front of a lunatic’s blade to save him from certain death, she finds out Conrad isn’t so admirable after all. In fact, he’s traded her soul to the Devil!

While her body lies comatose on the Mortal Coil, Kirsty’s spirit is dragged straight to Hell…which is not quite the fire-and-brimstone abyss she’d expected. In fact, the place is quirky, wacky, and not without charm. Desperate to reunite body and soul before her time runs out, she seeks out allies, earning the friendship of a powerful drag demon, a psychic server and most importantly, Hell’s civil servant. But what of her growing attraction to Dante, the sexy Reaper with a flair for romantic language—can she forgive him for scything her soul?

Stuck in the netherworld, Kirsty vows she’ll do everything on her postmortem bucket-list, starting with getting her life back and ensuring that Conrad has Hell to pay!

For something a little difference and a lot funny, check out THE RELUCTANT REAPER, available wherever ebooks are sold.

Book 1. THE RELUCTANT REAPER: Death is what happens while you’re making other plans. Available now.
Book 2. SCYTHE DOES MATTER: Be careful what you wish for, it just might get you! July 19, 2013
Book 3. ESPRIT DE CORPSE: Hell is where the heart is. August 15, 2013