Captain Hook as a romantic hero?
Voodoo Bride loves to see how that plays out. 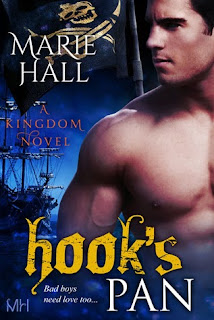 Trishelle Page has known pain in her life, but instead of it making her weak, she's stronger. Confident. That is until the day a fairy kidnaps her during her staring role in Peter Pan's play and tells her not only do fairy tales exist, but that she's the soulmate of the pirate they call Hook, making her question everything she ever thought she knew.

Captain James Hook is a man at the end of his rope. He's not the villainous bastard tales have made him out to be. So when the curvaceous blonde drops, literally, at his feet he aims to prove it to her. If only to get her into his bed.

What neither one knows is that fate and magic are conspiring and they can deny the attraction all they want but the end is already written, it's just a matter of getting there.