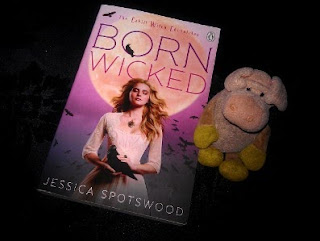 What is it about:
Everybody knows Cate Cahill and her sisters are eccentric. Too pretty, too reclusive, and far too educated for their own good. But the truth is even worse: they’re witches. And if their secret is discovered by the priests of the Brotherhood, it would mean an asylum, a prison ship—or an early grave.

Before her mother died, Cate promised to protect her sisters. But with only six months left to choose between marriage and the Sisterhood, she might not be able to keep her word... especially after she finds her mother’s diary, uncovering a secret that could spell her family’s destruction. Desperate to find alternatives to their fate, Cate starts scouring banned books and questioning rebellious new friends, all while juggling tea parties, shocking marriage proposals, and a forbidden romance with the completely unsuitable Finn Belastra.

If what her mother wrote is true, the Cahill girls aren’t safe. Not from the Brotherhood, the Sisterhood—not even from each other.

I will confess I have little patience with the trope of 'older sibling promised dying parent to look after the others and is being overly protective'. So Cate did annoy me a lot whenever she was deciding to keep things from her sisters to 'protect' them or when she decided for her sisters what they should do.

That annoyance aside I enjoyed this story. The setting is intriguing, the romance sweet and the overall plot suspenseful. I especially liked Tess, the youngest of the sisters, and Cate's love interest Finn. They were both really nice and interesting characters.

I have to say that my copy of this book had a different backcover story than the one I posted above and because of that spoilery backcover story the ending didn't come as a surprise, which was a shame in my opinion. Even though I saw it coming, the ending was quite something though and I'm very curious what will happen next.

So all in all this is an entertaining read and I will try to get hold of the next book in this series.

Why should you read it:
It's an enjoyable Paranormal YA read

This has been sitting on my TBR pile for a while. I've hear such mixed things about it. But I'm intrigued by the sisters, witches, and, now, I have to know the end.

I really liked this book, especially the world building and alternative history aspects. It sucks that the back cover was spoilery. :(

I have a weakness for witches, so I will be putting this one on my wishlist :) Thanks for the review Sullivan.

I have this one but I still have to read it.

Thanks for your comments everyone.
It's a really nice read and I'll have to get book two one of these days.