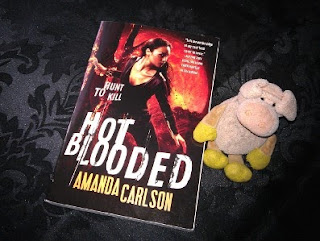 What is it about:
It hasn't been the best week for Jessica McClain.

Her mate has been kidnapped by a Goddess hell-bent on revenge --- but Jessica is playing for keeps.

Because she's the only female werewolf in town...it comes with its own set of rules...and powers.

Aided by two vamps, two loyal Pack members, and one very reluctant human, Jessica must rescue her man while coming to terms with what being a wolf really means.

All in a day's work for a girl.

The second novel in the Jessica McClain series is a full on action adventure featuring one angry Goddess and plenty of monsters, demons, and a few newly risen beasties...

What did I think of it:
I very much enjoyed the first book in this series, so I had high hopes for Hot Blooded.

And I can tell you this book delivers!

It's a really cool and action packed adventure. Jessica has to overcome many obstacles to find and rescue her mate. Along the way she discovers a lot about herself as well.

I really like Jessica and even though she seems a bit too powerful at times I could relate to her. I also liked most of the other characters, although I'm having a hard time in getting to understand and like Jessica's brother Tyler for some reason.

The action in intense and there are some really cool monsters Jessica has to fight. I liked getting to learn more about the vampires as well. I did miss Roarke's presence for most of the book though and I hope he'll have a bigger role in the next book.

The ending was yet another cliffhanger and I'm anxious to see what will happen next, so you can bet I'll be getting my trotters on the next book in this series.

Why should you read it:
This is a cool, action packed Urban Fantasy read.

I am still not sure I want to read this series. And the shallow reason is, I dislike the covers so much!

I am glad you enjoyed it though.

YEa! So glad to hear you enjoyed this one too. :D I loved the growth of Jessica in this book. :)

I love this series! can't wait for the next one