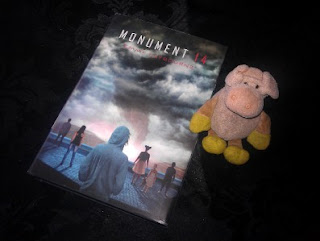 What is it about:
Fourteen kids. One superstore. A million things that go wrong.

In Emmy Laybourne’s action-packed debut novel, six high school kids (some popular, some not), two eighth graders (one a tech genius), and six little kids trapped together in a chain superstore build a refuge for themselves inside. While outside, a series of escalating disasters, beginning with a monster hailstorm and ending with a chemical weapons spill, seems to be tearing the world—as they know it—apart.

What did I think of it:
What's with all these older siblings who hover over their younger siblings and don't want them to make their own friends and explore the world on their own?! It seems to be a recurring theme in Young Adult books.

Apart from wanting to kick the main character Dean for his older sibling syndrome from time to time I really enjoyed this book though.

14 kids get stuck in a superstore during a disaster of apocalyptic proportions. I loved reading how they each reacted in their own way and about the group dynamics. I even really liked reading about the younger children and how they cope, and usually I don't really like the inclusion of small children in books.

With 14 kids it's difficult to give all of them enough screen time to get to know them, but I think Laybourne did a decent job at that. I think she managed to make the kids and the things they do realistic. Their problems and fights were interesting to read and I soon had my favorites who I rooted for. Dean as lead character was of course among those, but I also really liked Niko, a silent, but practical guy who turns out to be a natural leader.

Near the end of the book there are some developments that force the group to make an important decision and the book ends with a bit of a cliffhanger, but not annoyingly so. I will confess I did order the second book in this trilogy soon after finishing this book though and I hope it gets here soon.

Why should you read it:
It's a really cool post-apocalyptic YA read.