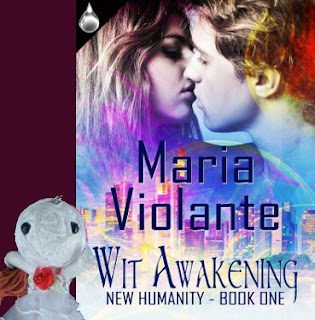 What is it about:
Leah feels human, but she's actually a "Wit"—her brain is the host of an organic processing unit that regulates her actions and emotions. As part of the lowest subclass of society, she submits to a human handler who owns her, body and mind.

De Leon is the rising star of the Copy Leagues, a no-holds-barred fighting organization for genetically altered and technologically augmented Wits. His past is dark and his future uncertain, but with enough wins, he just might be able to break free of his bondage to his trainer and enjoy life as a citizen of New Dallas.

Neither of them expected to fall in love, but when her handler begins to bring Leah to the fights, a secret and dangerous relationship blossoms, one that threatens both of their lives.

What did Voodoo Bride think of it:
This is an intriguing and disturbing Futuristic Romance.

Leah is created for her owner Jacob's enjoyment. She's a bio-engineered human with a processing unit that can take over her actions. It was very disturbing to read how Jacob treated her like a toy or at best a pet. Although just as human as Jacob, she is treated as less because of the way she was created. Her life at the start of the story is so bleak, I couldn't help rooting for her to find happiness.

When she meets De Leon she learns she doesn't have to be a slave to her processing unit and that there's more to life than following Jacob's commands. Slowly she starts to explore her emotions instead of letting her processing unit take over. Her growing awereness made Jacob and his actions seem even more horrific I will confess. The way he and other 'real' humans treat the Wits is chilling.

I loved seeing Leah open up and start to question her life and her owner's motives. The developing romance between her and De Leon seems a bit fast, but at the same time I could understand why Leah felt so strongly about De Leon so fast. There's a sweetness to the romance between Leah and De Leon that was in strong contrast to the bitter life Leah and other Wits lead and that I really enjoyed.

Leah's awakening and De Leon's attempts to win his freedom lead to events that change both their lives and even though the story doesn't end on a cliffhanger it did leave me wondering what will happen to them next.

All in all this is a romance that is both beautiful and thought provoking and I think I'll have a look at what other books Violante has written.

Why should you read it:
It's an intriguing and sweet Futuristic Romance.

Maria Violante was kind enough to offer one ebook copy of Wit Awakening to a reader of my blog.

So for a chance to win:
Leave a comment on this post with a way to contact you before july 27th 2013.
I'll pick a winner at random soon after.

This giveaway is international and open to everyone who's old enough to be allowed to enter giveaways without asking permission and old enough to read this book.

"Intriguing and disturbing" - sounds good to me. Sounds very different too, which I appreciate.

This sounds very interesting! I'll throw my name in the hat, please!

Thank you both for entering.
Mary, you are the winner and I've send your name to Maria. Congrats!