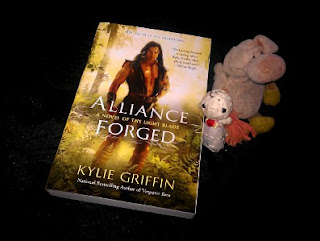 What is it about:
Hunted and marked for death by Na’Reish demons for their half-blood heritage, the Na’Chi are searching for a new home—something an alliance offered by the human leader could provide. With both races divided by prejudice, when Light Blade rebels brutally attack the Na’Chi, the alliance seems doomed to fail.

Varian, leader of the Na’Chi, a hybrid race of gifted warriors, is cursed with the darker impulses of his demon heritage. Controlling the part of himself that craves the high of the battle is a struggle he’s afraid he’ll lose—until he meets Kymora Tayn, a priestess driven to serve her deity. While he’s unwilling to trust anyone outside his people, he finds himself drawn to Kymora’s strength and passionate nature, and discovers she has the power to calm the darkness inside him.

When the Na’Reish raid human territory for blood-slaves and kickstart the war, the key to the survival of both races—Na’Chi and human—is an alliance. However when Kymora is kidnapped, pitting human against human, Varian realizes he must embrace his darker half, not only to save the alliance…but also the woman he loves.

What did Voodoo bride think of it:
I totally love this book.

I already told you I'm falling more and more in love with this world with each new book I read in this series and that again was true when reading Alliance Forged. I can only hope Griffin will write more books in this series, because I'm slightly addicted to this fantasy world full of demons and half demons.

And the romance!
Varian and Kymora are my favorite couple so far. Varian is such a delicious, tortured hero, and the blind Kymora is a really great heroine as well. She's strong and capable and not afraid to confront Varian when all others are afraid of him. The romance between them was both intense and sweet.

The action storyline is a continuation from the first book, but things are explained enough that you could read this as a standalone. Of course there are some things that might make you wonder, but not annoyingly so I think.

All in all this is an intense and delicious read and I will reread this book and the other two regularly while hoping a fourth book will be released.

Why should you read it:
It's a very satisfying Fantasy Romance

Great review Sullivan, so glad you love this series. And I will start it soon ....

A friend sent me links to your reviews of my Light Blade series and I'm thrilled you're enjoying the characters and the world they live in!

Just quietly, Kymora & Varian hold a special place in my heart as a couple. They were so much fun to write. :-D

Your reviews are also very appreciated! I hope your blog readers are inspired by your comments and intrigued enough by the storylines that they pick up a copy! :-)

You'll be happy to know I have a few more books in this series planned (and I hope to spend the next few months writing one of them!).

And I do love the photographs you've taken of the books you review complete with your toys (the pig is gorgeous).