Today an interview with Cecy Robson, author of the Weird Girls series. A series that Melliane from Between Dreams and Reality loves and that's high on Voodoo Bride's wishlist. 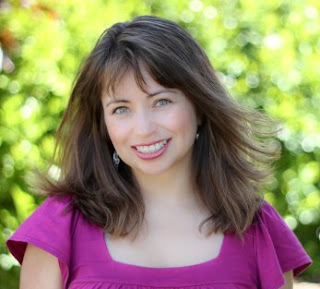 Cecy, welcome to Pearls Cast Before A McPig.
Could you tell a bit about yourself for those people who don’t know you yet?

I’m not sure how “nerd” translates into French or Dutch, but that’s what I am. I love superheroes and pretty much anything dealing with fantasy. To this day I think THE LORD OF THE RINGS trilogy is the best series of movies ever made. And in case you’re curious, I named my parakeet, Harry Dresden, and have a remarkable obsession with Thor.

How many books will there be in the Weird Girls series?

So far, there are at least eight planned for Celia, two for Taran, two for Emme, and one for Shayna. I also have three books planned for a spinoff character.

All my characters are made up in my head―there’s A LOT going on in there. I did, however, name Bren after Brendan, a little boy I used to take care of. Aric’s last name, Connor, comes from Brendan’s brother, Connor, whom I also cared for. That said, my characters are unlike anyone I’ve ever met.

My OLD ERTH trilogy is currently on submission and based on the Scottish Fae. This project is a high fantasy romance and different from anything I’ve ever done.

At the hospital welcoming babies into the world, I’m also a labor and delivery nurse. 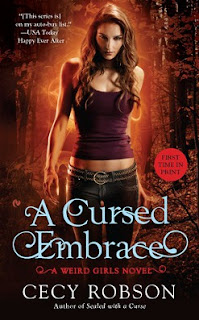 My family and I went out to dinner. I wanted to cry / scream / jump with joy the whole time.

The best is sharing my overactive imagination with readers―and having them eager to want more!

I don’t have the opportunity to read much. Usually, I save my time for my favorites and those who made me fall in love with the Urban Fantasy genre. They include the wonderful Patricia Briggs, Jim Butcher, and Ilona Andrews. I also recently met Chris Marie Green―and I’m dying to read her series. GHOST STORY was the last book I read, and I’m almost finished with COLD DAYS.

Heh, heh. Great question! Pigs are certainly not out of the question. As far as zombies go? I actually have a fun storyline planned for one that attaches herself to one of my “weird” girls.

Thank you, ladies and pig. It was an honor to be featured on your blog!

Thanks to you as well. It was an honor to have you drop by. 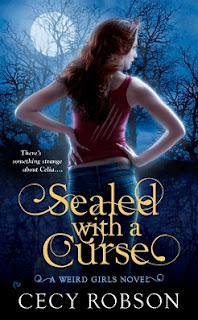 About Sealed With A Curse:

Celia Wird and her three sisters are just like other twenty-something girls—with one tiny exception: They're the products of a curse that backfired and gave each of them unique powers that make them, well, a little weird…

The Wird sisters are content to avoid the local vampires, werebeasts, and witches of the Lake Tahoe region—until one of them blows up a vampire in self-defense. Everyone knows vampires aren't aggressive, and killing one is punishable by death. But soon more bloodlust-fueled attacks occur, and the community wonders if the vampires of Tahoe are plague-ridden.

Celia reluctantly agrees to help Misha, the handsome leader of an infected vampire family. But Aric, the head of the werewolf pack determined to destroy Misha's family to keep the area safe, warns Celia to stay out of the fight. Caught between two hot alphas, Celia must find a way to please everyone, save everyone, and—oh, yeah—not lose her heart to the wrong guy or die a miserable death. Because now that the evil behind the plague knows who Celia is, he's coming for her and her sisters.

This Wird girl has never had it so tough.

Cecy Robson has kindly offered a copy of A Cursed Embrace to one reader of my blog.

The winner is Janie M.

A winner will be picked at random on September 21st.
Open internationally to everyone who's legally allowed to enter this giveaway.

I'm a huge fan of the WEIRD GIRLS series and caN't wait for Cecy' s next release. Her books are so much fun!
Love the interview!

I'm a huge fan of the WEIRD GIRLS series and caN't wait for Cecy' s next release. Her books are so much fun!
Love the interview!

I love this series, it just so bad you have to wait between books :)

Cecy Robson is awesome :) I adore Weird girls series, especially Misha and Taran and I cant wait for Cursed by destiny <3

I love this series so much! I can't wait for book 3, the wait is a killer.

I like how many books she has planned for the Weird Girls, I didn't know that!! So excited.

Not entering either as I have both books already, perhaps you should win this one yourself Sullivan ;)
It is a great series and I am happy to find out that there are so many books planned. I am just not an Aric fan ...

@Aurian: I will confess some of these giveaways are tempting ;-)

thank you for this so interesting and full of info interview ^^

I love the name of the series. An attention grabber for sure!

Thanks for the international giveaway!

I love the interview, it made me laugh :D Congrats on the books and the new series[yay]

Thank you everyone for your kind words and for Sullivan McPig for hosting me. Special thanks to Between Dreams and Reality for their help as well. I hope those who haven't read my Weird Girls series give my books a chance. Those who have, THANK YOU! The best is yet to come!

Haven't read Sealed With A Curse yet, waiting for the third book so I can enjoy them together. ;) The Old Erth trilogy sounds fantastic, looking forward to it!

I keep hearing I should read book 1, yes yes I am just slow cos I want it

Fun interview! Also, I've heard great things about the series, so I can't wait to start it :)