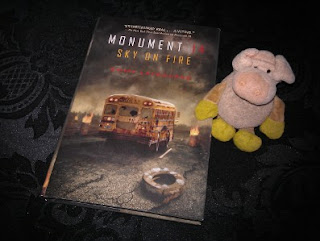 What is it about:
Trapped in a superstore by a series of escalating disasters, including a monster hailstorm and terrifying chemical weapons spill, brothers Dean and Alex learned how to survive and worked together with twelve other kids to build a refuge from the chaos. But then strangers appeared, destroying their fragile peace, and bringing both fresh disaster and a glimmer of hope.

Knowing that the chemical weapons saturating the air outside will turn him into a bloodthirsty rage monster, Dean decides to stay in the safety of the store with Astrid and some of the younger kids. But their sanctuary has already been breached once. . . .

Meanwhile, Alex, determined to find their parents, heads out into the darkness and devastation with Niko and some others in a recently repaired school bus. If they can get to Denver International Airport, they might be evacuated to safety. But the outside world is even worse than they expected. . .

What did I think of it:
I will confess I had my doubts at the end of book 1.

I loved Monument 14, but when Alex and a group of other kids leave the superstore at the end of the book I could have slapped them. Leave a save place!? Why!!! Still, I expected Laybourne to go easy on them in Sky On Fire, because often I seem to see dangers where authors of Dystopian and Post Apocalyptic YA see none.

Luckily in Sky On Fire this wasn't the case.

Laybourne shows how cruel a post apocalyptic world can be and doesn't make it easy for her characters. There's lots of perils and the kids have to be smart and resourceful to stay alive. When they do stupid things, they have to deal with the consequences.

I really liked getting inside Alex's head. In Monument 14 you only get to see Dean's thoughts about Alex, so I enjoyed getting to know Alex from another angle.

As for Dean, I really don't get his feelings for Astrid, but I liked reading how he and the kids who stayed behind in the superstore are trying to manage.

Overall this is a really suspenseful, action-packed story that shows a gritty and harsh world. I enjoyed reading it very much and I'm already looking forward to the release of the last book in this trilogy.

Why should you read it:
It's a really cool Post apocalyptic read.