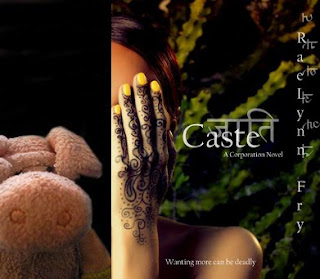 What is it about:
Seventeen-year-old Karis Singh’s little brother is dying and the Corporation’s Analysis has concluded that he’s not worth saving. One thing is stopping her from going into the city and stealing the medicine herself—the tattooed Mark that physically bars her from entering. The only way around that is to get it altered in the Black Market— an act that carries the possibility of a horrific and slow death— guaranteeing her the access she needs.

Willing to do whatever it takes, she accepts the help of the mysterious Ethan, a boy with an agenda of his own and who knows too much about the enemy. As her time in the city passes, dark secrets are uncovered about the Corporation and what really happened to her brother. When the tables turn and the stakes get higher, Karis is forced to align herself with the deadliest beast of all, risking everything in order to save her brother.

Now, the most treacherous part of Karis’ plan is staying alive long enough to make it back home.

What did I think of it:
I've been on a Dystopian/Post Apocalyptic reading spree lately so when Fry offered me a review copy of Caste I jumped at the chance.

I will confess it took me a while to warm up to Karis, she's a bit grumpy at the start of the story, but once the story really got going, and I learned more about the world Karis was living in I could understand why she was a grump at times and I started to cheer her on.

The world building was intriguing and well done. I could easily picture the depressing city where Karis lives and I really liked the idea of two cities coexisting, while both cities are being kept in the dark about the real workings within the neighboring city. As a setting for this story it worked really well.

The story itself is entertaining, though a bit predictable at times. Some plot twists I saw coming from miles away while Karis was totally surprised, which she wouldn't have been if she would have stopped to think about things in my opinion.

That small grumbling aside I very much enjoyed the story and both the hints at possible things to come dropped throughout the story and the cliffhanger ending make me curious to read the sequel once it's available.

Why should you read it:
It's a very nice Dystopian YA read.

I've never heard of this book, but it sounds awesome! I'm also on dystopia kick right now. Thanks for fueling my addiction. ;)