An Interview with Ann Aguirre + Giveaway

Today it's the official release day of Perdition by Ann Aguirre. Coincidentally it's also Ann's birthday today. She still had time to answer some questions for me though.

Ann Aguirre is the author of the SF series Sirantha Jax, the UF series Corine Solomon, the Razorland Trilogy of which the last book Horde will release in October, and many other awesome books. 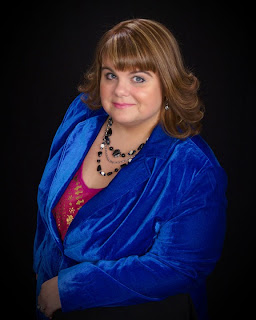 Hi Ann. Happy birthday and welcome to Pearls Cast Before A McPig.

Could you tell a bit about yourself for those people who don’t know you yet?

You write SciFi, Urban Fantasy, Post Apocalyptic YA, Steampunk, Fantasy and Romantic Suspense. Do you have a favorite genre to write in or are they all equally fun?

I can’t commit to one genre. I would get bored writing the same type of book year after year, so diversity is necessary and fun. I love the genre I’m with.

Today is the release day of Perdition, the first book in a new series. What can we expect from this series?

Perdition is darker than the Jax series and the characters are more morally gray. The series is gritty and violent, and I’d say it’s a little sexier, too. The books are written in third-person, multiple points of view, so that’s a departure from Jax as well.

Any chance you will write more Post Apocalyptic books?

Anything is possible. I’ve had numerous requests for more Thistle & Thorne, characters I wrote for a Luna anthology, and I do have a proposal percolating for a full Red Zone novel.

What can you tell us about the Mortal Beauty trilogy of which the first book releases next year?

Pitched as Doctor Faustus meets Mean Girls, set in a dark world of secret societies, twisted bargains, and forbidden love. The heroine is named Edie, and the hero is called Kian. I’m not going to tell you more than that because the story's insanely complex in what my agent calls the “down the rabbit hole” way; that's where everything starts relatively normal, but the deeper in you get, the wilder and more unusual the world becomes. Plus, I feel a little superstitious about this project. It’s the biggest deal of my career and I don’t want to leak too many details. 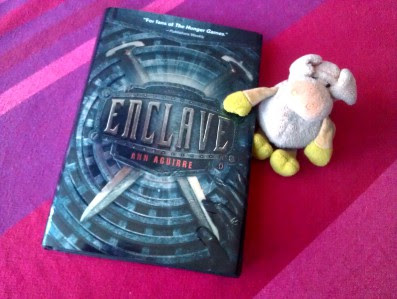 Writing stories that I love and readers enjoy... and calling it work. Writing in my jammies is pretty awesome, too.

And what do you like the least about being a published author?

All of the factors I can’t control.

What authors have been an influence to you?

I spent my allowance on books as a kid. After I got my first job, I put part of the money in my gas tank; the rest I spent on books. In college, I was much the same, but there were certain authors I would buy instead of food.

Sharon Shinn was one of them.

So clearly I can remember how I felt when I discovered her books for the first time. I was in a dungeon of a shop in Muncie, Indiana. I didn’t really want to be there because, frankly, they sold gaming stuff: Dungeons and Dragons, sourcebooks, dice, graph paper, and pewter miniatures. I wanted to be in a proper bookstore because I had a little money to spend. (My part-time job as a pharmacy tech paid all of $4 an hour.) But I had gamer friends (and I played too, but my great love has always been fiction), so I was hanging around the store, waiting for them.

As I wandered, I eventually came upon a wire book rack. It mostly had TSR novels (Drizzt, Forgotten Realms, Dragonlance) and maybe a few White Wolf stories. I was spinning it listlessly when this fey cover art caught my eye.

Hm, what’s this? I asked myself, plucking the book from the rack. The Shapechanger’s Wife. I read the back and it sounded wonderful, so I bought it at once. While they finished shopping, I hugged the paper bag to my chest and couldn’t wait to get home to start reading. In short, I devoured that one in a few hours and then from that point on, I would buy whatever she released, even if I had to dine on ramen… or nothing at all.

The coolest thing about Sharon Shinn is that so many years later, I’ve had the pleasure of her reading my book for a blurb—and then I met her. After that, I cried tears of pure joy over a dream come true. It’s so wonderful when your idols turn out to be even more amazing than you dreamed. Since then, we’ve developed a relationship and I am honored to call her my friend.

She’s inspiring to me because when I found her books, she was a woman living in the Midwest. She didn’t seem to be famous or connected to publishing. She earned her publishing contract through her beautiful writing and through persistence. She gave me hope that I might be able to do it someday, too. If not for her, shining as a beacon of hope for another Midwestern girl, I might’ve given up on my dreams. I’ll never stop thanking her for blazing a trail that I pictured myself following.

And have you read any books lately that you want to share with us or have you been too busy with writing to read?

I am never too busy to read. Ever. Words are my rocket fuel.

The last book I read that blew me away was INDELIBLE by Dawn Metcalf. It was so amazing that you should go read that instead of this interview.

Will there be zombies or pigs in any of your future books?

Thanks for dropping by and I hope you have a wonderful day. 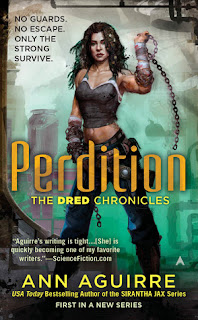 The prison ship Perdition, a floating city where the Conglomerate’s most dangerous criminals are confined for life, orbits endlessly around a barren asteroid.

Life inside is even more bleak. Hailed as the Dread Queen, inmate Dresdemona “Dred” Devos controls one of Perdition’s six territories, bordered on both sides by would-be kings eager to challenge her claim. Keeping them at bay requires constant vigilance, as well as a steady influx of new recruits to replace the fallen. Survival is a constant battle, and death is the only escape.

Of the newest convicts, only one is worth Dred’s attention. The mercenary Jael, with his deadly gaze and attitude, may be the most dangerous criminal onboard. His combat skill could give her the edge she needs, if he doesn’t betray her first. Unfortunately, that’s what he does best. Winning Jael’s allegiance will be a challenge, but failure could be worse than death…

Ann Aguirre has kindly offered a copy of Perdition to one reader of my blog.

And the winner is: Heather S.

A winner will be picked at random on September 17th.
Open internationally to everyone who's legally allowed to enter this giveaway.

I've just finished reading Ann's Corine Solomon series and I am going to miss Corine, Chance et al! Love that series - any chance that there will be a new UF series in the near future...? Perhaps with Jesse and Shannon as leads...? :-)

I'm so glad Ann found Sharon! What a sad world it would be without Jax & Deuce & Corrine (& Dred? We'll see shortly!) & everyone else she has peopled her worlds with!

Awesome fun interview! This is a new author to me but one I will check out. :)

I've already got my copy of Perdition coming so I'm not entering the contest. I love Ann's books, and I'm so glad she does write in different genres, it certainly makes it more fun to try to keep up with them all. I want to wish her a very Happy Birthday Ann, hope it's been a fun day!

darker than siratha jax... i'm even more curious now. i do appreciate the fact she writes in different genre that way more people can enjoy at least oen series^^

Ann Aguirre's books are on my wish-list as several friends have told me how absolutely brilliant she is. So far I haven't gotten around to reading one of her books yet, but Perdition sounds like the perfect book to start with!

I love, love, love Ann's work!!! I'm not entering cuz I just got my copy of Perdition!!!! *happydance*. Thanks for the fun interview!

Happy Birthday Ann! I hope you have / had a great day.
I am glad she writes multiple genres. I could not get into the first Jax book, so I will just try something else.

I am really anxious to read this one. I loved Jax and to hear its even darker intrigues me even more.

That new serie seems awesome ! I can't wait reading it ! :D
I'm participating and hoping very hard I will be the lucky one !

I've read great things about Enclave (I have it sitting on my shelf, waiting for book 3) and how Ann writes in general. Can't wait to read something by her.

Hi ! I'm waiting for Enclave : Outpost ! Ann Aguirre writes like... a... so... No matter, I'm participating ! I just have to hope now.
bellaweb@hotmail.fr

Love the diversity of Ann's books! Haven' got the chance to read most of them yet but the few that I did read blew me away! The story about Shannon Shinn is lovely, thanks for sharing.

Awesome interview, I especially loved the part about Sharon Shinn :) I'm definitely going to check out her books, and I actually own Indelible, although I still haven't read it, so I'll move it up on my TBR :)
Thanks for this interview & the giveaway!