In The After - Book Review 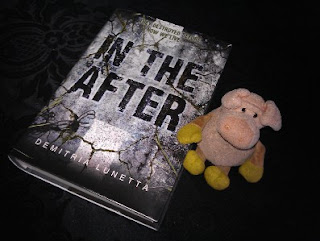 What is it about:
They hear the most silent of footsteps.
They are faster than anything you've ever seen.
And They won't stop chasing you...until you are dead.

Amy is watching TV when it happens, when the world is attacked by Them. These vile creatures are rapidly devouring mankind. Most of the population is overtaken, but Amy manages to escape—and even rescue “Baby,” a toddler left behind in the chaos. Marooned in Amy’s house, the girls do everything they can to survive—and avoid Them at all costs.

After years of hiding, they are miraculously rescued and taken to New Hope, a colony of survivors living in a former government research compound. While at first the colony seems like a dream with plenty of food, safety, and shelter, New Hope slowly reveals that it is far from ideal. And Amy soon realizes that unless things change, she’ll lose Baby—and much more.

What did I think of it:
I wasn't too sure about this book I'll confess.

It did sounds intriguing, but I'm no fan of toddlers in my fiction, so I started this book while feeling apprehensive.

And just a few chapters in I thought I would totally hate this book. Not because of the toddler though, I must say I actually liked Baby. It was both Amy and the aliens I had trouble with.

Amy is one of the least likeable heroine's I've come across in YA. If there's something about her that's likeable I at least haven't been able to discover it.

They're so brainless I could only wonder how they ever made it off their planet, let alone made it to earth.

I'll confess that at one point I only kept reading to see if there would be an explanation for the behavior of the aliens.

And then Amy and Baby got taken to New Hope and the story started to look up!

I actually started to enjoy the story from there on out and when I finished the book I still didn't like Amy, but In The After as a whole did manage to redeem itself.

I'm not sure if I will read other books in this series, but apart from the first few chapters this is a cool and intriguing read.

Why should you read it:
It's a cool Post Apocalyptic YA read

Funny that there was never an explanation for their stupidity...

There is, but it's too spoilery to discuss here.

I was chomping at the bit to read this one, but maybe I will nibble on something else first ;)

It might be just me. I can be a bit too critical at times.