One of Voodoo Bride's favorite authors is Katie MacAlister.

Voodoo Bride loves Katie's snarky and sexy books about Dark Ones, a sort of vampires.

So today we want to highlight two of those books and there's a swag giveaway as well. 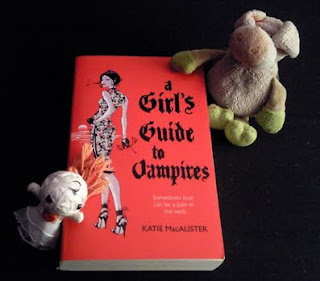 A Girl's Guide to Vampires (Dark Ones #1)

All Joy Randall wants is a little old-fashioned romance, but when she participates in a "Goddess evoking" ceremony with her friend, Roxy, Joy finds out her future true love is a man with the potential to put her immortal soul in danger. At first the ever-practical Joy is ready to dismiss her vision as a product of too much gin and too many vampire romances, but while traveling through the Czech Republic with Roxy, Joy begins to have some second thoughts about her mystery lover because she is suddenly plagued by visions of a lethally handsome stranger. Then, when she and Roxy attend a local GothFaire, Joy meets Raphael Griffin St. John, head of security, and she becomes even more bewildered because the dark and dangerous Raphael seems too close to her dreams for comfort.

Voodoo Bride's thoughts:
If you're looking for a light, funny, romantic and steamy read that also has some mystery going on this is the perfect book to pick up! This book is pure fun. Joy is a cool, quirky lead character and the males (yes: plural! But don't be expecting a menage, merely a triangle or square) aren't half bad either! Macalister's vampires are original and very cool, but luckily they do comply to some universal vampire rules I think every vampire should comply to (meaning no sparkles) so I could really love them. All in all an enjoyable read and after finishing this book I ran out to buy more books in this series. 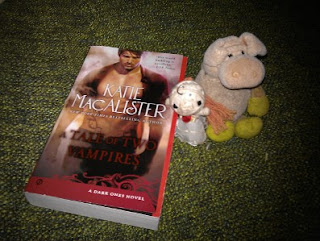 Iolanthe Tennyson has had a very bad year—due in part to the very bad men in her life. So, she’s accepted her cousin’s invitation to spend the summer in Austria indulging in her photography hobby. There, rumors of a haunted forest draw Iolanthe into the dark woods—and into the eighteenth century…

Nikola Czerny is a cursed man, forced by his half-brothers to live forever as a Dark One. But his miserable existence takes an intriguing turn when a strange, babbling woman is thrown in his path. Iolanthe claims to know Nikola’s daughter—three hundred years in the future. She also knows what fate—in the form of his murderous half-brothers—has in store for him. If only she knew the consequences of changing the past to save one good, impossibly sexy vampire…

Voodoo Bride's thoughts:
This is a seriously fun book. As with all Dark Ones books I've read so far it's funny, witty and has a delicious romance. I really liked Io, she's a quirky and fun character who speaks her mind. Nikola is a great character as well. I didn't know it was possible to write a nerdish alpha male, but MacAlister pulls it off.

The story was fun from start to finish. There were some inconsistencies, but MacAlister's books are just too much fun to worry about things being consistent. They're all about the romance and the two lead characters overcoming all obstacles that keep them apart.

I did think the romance in this book was less hot than in the other books I read in this series, but it was the sweetest romance I've read from MacAlister so far, so I won't hold the lack of scorching love scenes against it.

Next to the Dark Ones series Katie MacAlister writes lots more series: There's dragons, guardians, time travellers, steampunk and more. Voodoo Bride hopes to be able to start on one of these other series soon. 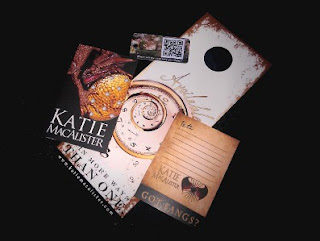 A winner will be picked at random on September 10th.
Open internationally to everyone who's legally allowed to enter this giveaway.

And the winner is: VampedChik

I am really glad you enjoyed these books VoodooBride. I have read a short cat shifter story, and have tried one of her dragon books, but I just don't like her writing style. So, I sold my collection to my best friend, who does hopefully enjoy them someday.

I haven't read anything by her yet... not even sure i own something already but i would have to check

I own nearly every book shes written! I adore her! Thanks so much!
-Amber