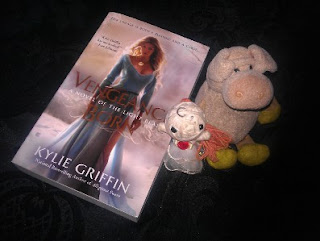 What is it about:
Annika, half-blood daughter of the Na'Reish king, longs for more than a tormented life among her father's people. Conceived in hatred and bred as a tool of retribution, she's gifted with a special talent that can heal as well as destroy...

With the Na'Reish vastly outnumbering them, Kalan, a Light Blade warrior, knows the future of humankind depends on him alone. Incursions into human territory and raids for blood-slaves by the Na'Reish horde have increased. As chosen leader, he faces the task of stopping the demons—and convincing the Council of aging Light Blade warriors that change is necessary for survival.

When Annika learns Kalan is a prisoner in her father's dungeon, her dream of escape seems within reach. She agrees to free him in exchange for his protection once they reach human territory. Now, marked for death for helping him, Annika must learn to trust Kalan as they face not only the perilous journey to the border but enemies within the Council—and discover a shocking truth that could throw the human race into a civil war...

What did Voodoo Bride think of it:
I read the third book in this series first, but I liked that book so much I just had to read the other books as well, so that's why I picked up Vengeance Born.

And luckily this book doesn't disappoint and is just as enjoyable as Allegiance Sworn.

I loved the character development and the pacing of the romance. When Kalan and Annika meet there's lots of distrust and unease between the two of them and I was happy that Griffin chose to make both of them work to overcome their initial feelings. This made the romance believable and very satisfying.

I already told you how much I liked the world building in my review of Allegiance Sworn, but I have to say once again: the setting and world in this series is really cool. I grow to love this world more with each book that I read.

The action storyline is well woven in with the romantic storyline and is very suspenseful. There's danger, betrayal and secrets to be uncovered. Although this book can be read as a standalone romance the overall world storyline isn't finshed yet and is intriguing enough to make me want to read the next book as soon as possible. That I met the lead characters of the next book in Vengeance Born and am very eager to read their story helped in bumping Alliance Forged to the top of my wishlist.

All in all this is a very enjoyable read and I already got my hands on book 2, so expect a review of Alliance Forged soon.

Why should you read it:
It's very enjoyable Fantasy Romance with a great setting.

I haven't got this book yet, but I am looking forward to reading this series soon.

I have it!, it was my birthday present so now i just have to move it up the pile^^

I am a mood reader and every once in a while I want to dive into that fantasy crossover. This looks like a good series to keep in mind for those times :) Thank you for sharing it with us.