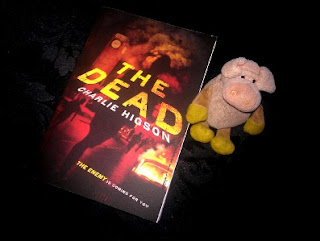 The Dead (The Enemy #2)
by Charlie Higson

What is it about:
The Dead is the second book in Charlie Higson's jaw-dropping zombie horror series for teens.

Maxie, Blue and the rest of the Holloway crew aren't the only kids trying to escape the ferocious adults who prey on them. Jack and Ed are best friends, but their battle to stay alive tests their friendship to the limit as they go on the run with a mismatched group of other kids — nerds, fighters, misfits. And one adult, Greg, a butcher, who claims he's immune to the disease. They must work together if they want to make it in this terrifying new world. But when fresh disaster threatens to overwhelm London, they realize they won't all survive...

What did I think of it:
I read the first book in this series 3 years ago, but even though I really enjoyed it, never got to ordering the second book until recently.

This book is just as cool as the first.

It has lots of action, gory zombie fighting scenes and more.

One thing I learned from The Enemy was to never trust Higson in keeping my favorite characters alive. That again was true for The Dead. Higson doesn't pull any punches and throughout the book the bodycount kept rising. I can't say I minded: it did make this book an intense read.

All in all this is a great read and I hope it won't take me another 3 years to get my trotters on the next book in this series.

Why should you read it:
It's a really cool YA zombie read.