Master Of The Opera - Cover Reveal of Act 1 and 2

Jeffe Kennedy was kind enough to let me be one of the first to show you the covers of the first two acts of her upcoming serial novel Master of the Opera!

Aren't they awesome?!
Voodoo Bride and I can't wait to read them. 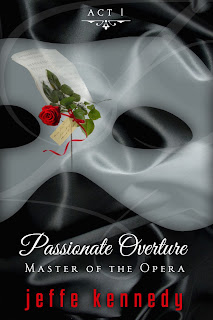 In the first tantalizing installment of Jeffe Kennedy's ravishing serial novel Master of the Opera, an innocent young woman is initiated into a sensual world of music, mystery, passion--and one man's private obsession. . .
Fresh out of college, Christine Davis is thrilled to begin a summer internship at the prestigious Sante Fe Opera House. But on her first day, she discovers that her dream job has a dark side. Beneath the theater, a sprawling maze of passageways are rumored to be haunted. Ghostly music echoes through the halls at night. And Christy's predecessor has mysteriously disappeared. Luckily, Christy finds a friend and admirer in Roman Sanclaro, the theater's wealthy and handsome patron. He convinces her there's nothing to fear--until she hears the phantom's voice for herself. Echoing in the labrynths. Singing of a lost love. Whispering her name: Christine.

At first, Christy thinks she's hearing things. But when a tall masked man steps out of the shadows--and into her arms--she knows he's not a phantom of her imagination. He is the master of her desire. . . 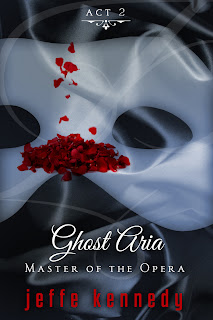 In the second seductive installment of Jeffe Kennedy's thrilling Master of the Opera, a young woman falls deeper under the spell of the man who haunts her dreams, fuels her desire, and demands her surrender. . .
With each passing day of her internship at the Sante Fe Opera House, Christine Davis discovers something new, something exciting--and something frightening. Hidden in the twisting labrynths beneath the theater is a mysterious man in a mask who, Christy's convinced, is as real as the rose he left on her desk--and as passionate as the kiss that burns on her lips. He tells her to call him "Master," and Christy can't deny him. But when her predecessor--a missing intern--is found dead, Christy wonders if she's playing with fire. . .


Find out more and pre-order here

Gorgeous! And I did love the musical.

Squee! Those are awesome covers. Thanks for sharing them! Can't wait for the books to be out. =o)