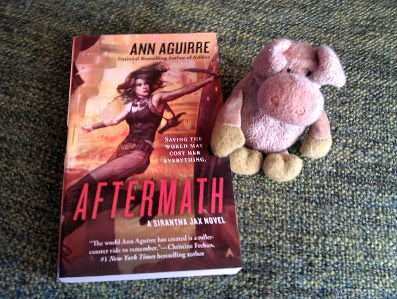 What is it about:
Sirantha Jax has the right genes—ones that enable her to “jump” faster-than-light ships through grimspace. But it’s also in her genetic makeup to go it alone. It’s a character trait that has gotten her into—and out of—hot water time and time again, but now she’s caused one of the most horrific events in military history…

During the war against murderous, flesh-eating aliens, Sirantha went AWOL and shifted grimspace beacons to keep the enemy from invading humanity’s homeworld. The cost of her actions: the destruction of modern interstellar travel—and the lives of six hundred Conglomerate soldiers.

Accused of dereliction of duty, desertion, mass murder, and high treason, Sirantha is on trial for her life. And only time will tell if she’s one of the Conglomerate’s greatest heroes—or most infamous criminals…

What did I think of it:
I'm in two minds about this book.

I really enjoyed it, no doubt about that.
It was well written, the story was both beautiful and cool and after finishing it I was all disappointed I now have to wait till the last book in this series is released.

It's just that I got the feeling that some plot devices were used to pull a bait and switch on me. It's hard to go into this without giving away spoilers, but it feels like some things just happened to change the way the reader might feel about certain things and to bypass some other possible plot difficulties. Could just be me though.

All in all this is a good story with some hidden fangs (in my opinion) and I look forward to Endgame to see how Aguirre will let Jax's story end.

Why should you read it:
It's an amazing SciFi series.