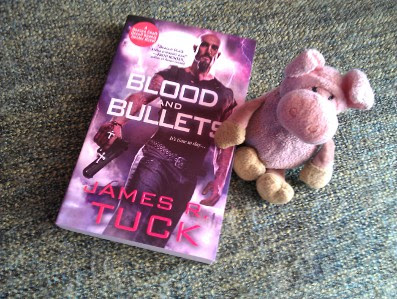 What is it about:
He lives to kill monsters. He keeps his city safe. And his silver hollow-points and back-from-the-dead abilities help him take out any kind of supernatural threat. But now an immortal evil has this bad-ass bounty hunter dead in its sights...

Ever since a monster murdered his family, Deacon Chalk hunts any creature that preys on the innocent. So when a pretty vampire girl "hires" him to eliminate a fellow slayer, Deacon goes to warn him--and barely escapes a vampire ambush. Now he's got a way-inexperienced newbie hunter to protect and everything from bloodsuckers to cursed immortals on his trail. There's also a malevolent force controlling the living and the undead, hellbent on turning Deacon's greatest loss into the one weapon that could destroy him...

What did I think of it:
I liked this book, even though there were times I contemplated putting it down.

Deacon is a cocky bastard who's so full of himself at times that it grated on my nerves. The fact that all women he meets seem to fawn over him didn't help either.

The story and action are really cool and the world building fits seemlessly into the story. No boring info dumps, but almost non-stop action from start to finish. Tuck's writing style is easy and fits both the action-filled story as well as Mr. Ego (a.k.a Deacon Chalk).

So once I tuned out the annoying character traits of Deacon Chalk and accepted reading this book was much like watching an action movie, I really enjoyed this book.

I most probably will be reading the next book in this series if only for all the cool fighting and pretty explosions ;-)

Why should you read it:
Don't read this story for likeable, well rounded characters: read it for the kick-ass action!

I have this one on my wish list - but haven't read a review for it until this one. :) I'm glad you enjoyed it enough to want to continue with the series.

I can advice it to anyone who loves some serious and well written action scenes.