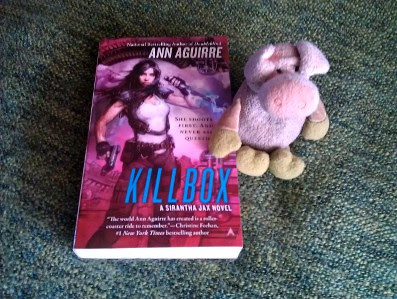 What is it about:
Sirantha Jax is a “Jumper,” a woman who possesses the unique genetic makeup needed to navigate faster than light ships through grimspace. With no tolerance for political diplomacy, she quits her ambassador post so she can get back to saving the universe the way she does best—by mouthing off and kicking butt.

And her tactics are needed more than ever. Flesh-eating aliens are attacking stations on the outskirts of space, and for many people, the Conglomerate’s forces are arriving too late to serve and protect them.

Now, Jax must take matters into her own hands by recruiting a militia to defend the frontiers—out of the worst criminals, mercenaries, and raiders that ever traveled through grimspace…

What did I think of it:
This book is both beautiful and frustrating.

I love Aguirre's writing style and her world building. The overall story is amazing: it's grim, gritty and nail biting good. It's Jax and March that made this story frustrating for me though. I felt like banging their heads together countless of times. I've never encountered a heroine and hero who are so stubborn and so convinced that what they do is the right thing when obviously it's not.

If Aguirre had made Jax even slightly less likeable I'd probably would have thrown this book across the room, but Aguirre knows just how to keep me hooked: Even with all the frustrating relationship drama I couldn't put this book down until I finished it.

And let me tell you:
I was so glad I had already bought Aftermath, the next book in this series, because I needed to know what would be next.

Why should you read it:
It's well written, gritty SciFi.