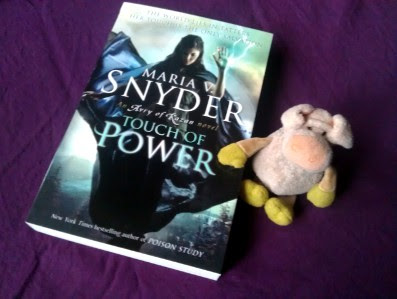 What is it about:
Laying hands upon the injured and dying, Avry of Kazan absorbs their wounds and diseases into herself. But rather than being honored for her skills, she is hunted. Healers like Avry are accused of spreading the plague that has decimated the Fifteen Realms, leaving the survivors in a state of chaos.

Stressed and tired from hiding, Avry is abducted by a band of rogues who, shockingly, value her gift above the golden bounty offered for her capture. Their leader, an enigmatic captor-protector with powers of his own, is unequivocal in his demands: Avry must heal a plague-stricken prince—leader of a campaign against her people. As they traverse the daunting Nine Mountains, beset by mercenaries and magical dangers, Avry must decide who is worth healing and what is worth dying for. Because the price of peace may well be her life...

What did I think of it:
Until recently Poison Study was by far my favorite book of those written by Snyder, but then I read Touch of Power and now I'm undecided about which of the two is the best.

I love the world Snyder created in Touch of Power. It's original and Snyder manages to breathe such life into this world that it feels believable and real.

Avry is a complex and intriguing character and although there were times she frustrated me, I couldn't help loving her from the start. The rogues who kidnap Avry are all well worked out characters as well and even though some of them felt a bit stereotypical, I really liked them.

The story is full of action, heartache, suspense and intrigue. There are several parties after Avry and all of them have their own (nefarious) reasons. Combined with Snyder's easy writing style all the action makes that you race through this book in no time, leaving you both satisfied and hungry for more. The perfect read for anyone who loves a good Fantasy adventure story.

I already am looking forward to the next book in this series and will be rereading Touch of Power often.

Why should you read it:
It's a cool Fantasy story full of action and adventure.

Great review! I so need to check this one out - thank you for sharing! :)