That Thing at the Zoo - Book Review 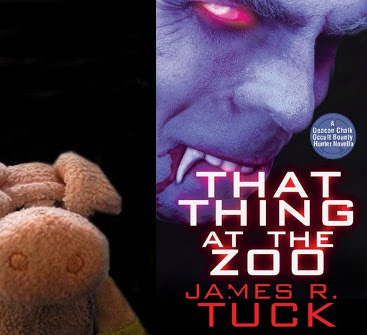 That Thing at the Zoo
by James R. Tuck
ebook, novella

What is it about:
Shredding monsters is his stock and trade. He sniffs them out, tracks them down, and corners them. End of story. But when the tables are turned, expect the unexpected.

Knowing his enemy is a rule Deacon Chalk swears by. But he's never seen anything like whatever is leaving the Atlanta Zoo's most dangerous predators bloodless, skinned, and hanging high in the treetops. And he's only got until sunrise to keep it from turning the entire city into a slaughterhouse.

Now Deacon is in zoo lockdown with a handful of staffers to save. His zookeeper backup has more guts than monster-hunting experience. And the only chance Deacon has to run this thing to holy ground is to unleash his darkest, most uncontrollable instincts...

What did I think of it:
This is a really cool novella.

Deacon Chalk is a kick-ass monster hunter who doesn't shy away from taking extreme measures to get the job done. He's gruff, direct to the point of rude, but likeable and with an intriguing past.

The world building is minimal, but effective enough to set a dark mood for this story, which is well written, fast paced and full of action. Next to a really cool and explosive tale of monster hunting and slaying this novella gives small hints to what other horrors Deacon might encounter in the future and it made me eager to read more about Deacon and the world he lives in.

As with every good story, this novella was much too short and I'm eagerly awaiting the arrival of Tuck's full sized novel Blood and Bullets, so I can get my next Deacon Chalk fix.

Why should you read it:
It's a cool, kick-ass novella about a monster hunter.

Both the title and cover art are quite eye catching! Tres coolio :)