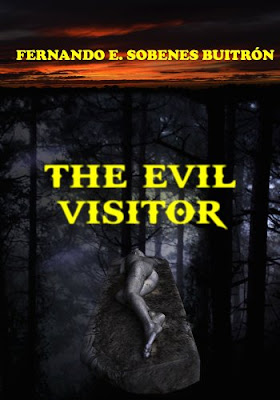 The Evil Visitor
by Fernando Sobenes

Northern Kuwait 1991 during the Persian Gulf War. Peter Donovan, lieutenant in the US Army, commanding a group of soldiers; walks into an ambush in the Iraqi desert and as a result a massacre occurs. There he finds an amulet that he puts in his pocket without knowing that it contains a hidden power; and because of it, has his first terrifying encounter in a grave underneath the sands of the desert with an evil being that takes him to death's door.

Several years pass after these events and Peter, after leaving the Army, moves to a place in the United States where he settles down, gets married and begins a family. It's beautiful place where people live happily far from the stress of the big city.

Peter serves as the town sheriff and gets together on the weekends with some other families. Their lives continue with peace and happiness until the day when they play with the Ouija Board, using the amulet that Peter brought from the Iraqi desert. They unintentionally open the door for evil to enter their lives; destroying them, sowing fear and death.

Email ThisBlogThis!Share to TwitterShare to FacebookShare to Pinterest
Labels: wishlist

Great pick! This one sounds like it'll be an awesome read, it's so being added to my TBR list - thank you for sharing! :)