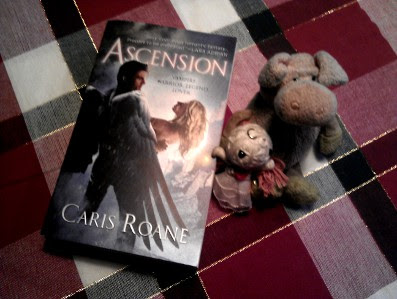 Ascension (The World of Ascension #1)
by Caris Roane

What is it about:
Alison Wells is no ordinary woman. Born with supernatural powers, she can never make love to a man without putting him in grave danger. But when her special vision reveals a glorious muscled man soaring overhead on mighty wings, she feels an overwhelming attraction she cannot resist—even as he tells her: “I have come for you. Your blood belongs to me.”

Kerrick is a vampire and a warrior who has fought his hunger for a woman’s love for the past two hundred years. As a Guardian of Ascension, he is sworn to protect Alison from the death vamp armies who crave her blood and her power. But Kerrick has cravings of his own—a forbidden longing to open his heart and veins to Alison. To share his blood…satisfy his thirst…and seal their fates forever.

What did Voodoo Bride think of it:
This book had some really raving reviews, so that's why I picked it up.

Sometimes I think I might be too critical or maybe that I have a weird taste compared to others.

I thought both the story and the writing were chaotic and that the romance was overly dramatic. Kerrick really needed to have some sense kicked into him in my opinion.

I also didn't really care about both lead characters, especially Kerrick. There were some side characters that seemed much more interesting. The best scene in the whole book was a scene between Alison and another character and made me wish the book was about him and Alison, maybe then I would have liked this book more.

On top of that I think the word 'suckle' was used way too much during the more romantic scenes. Just one use of this word is enough to kill the mood for me and here it was practically used about every two sentences.

All in all I was not impressed and won't be picking up any other books in this series.

Why should you read it:
It's a Paranormal Romance with winged vampires.