Where Demons Fear to Tread - Book Review by Voodoo Bride 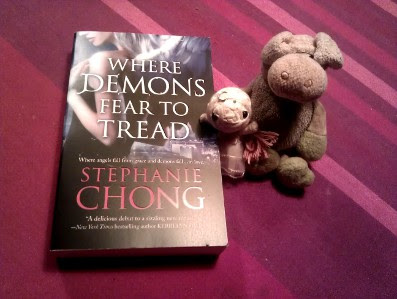 What is it about:
Fledging guardian angel and yoga teacher Serena St. Clair dares enter Devil's Paradise nightclub on a mission—to retrieve the wayward Hollywood "It Boy" she's assigned to protect. But she's ambushed by the club's owner, arch demon Julian Ascher. The most powerful demonic entity in Los Angeles, Julian is handsome as sin, a master of temptation who loves nothing more than corrupting pleasure–seeking humans. He won't release the lost soul Serena is supposed to guard. Unless she accepts his dangerous wager…

After the disastrous way his human life ended, Julian vowed that no woman would get the better of him again. Yet this sexy–sweet angel, smelling of fresh ocean air and happiness, triggers centuries–old feelings. Now, their high–stakes game of seduction, where angels fall from grace and where demons fear to tread, will lead them either to an eternity in hell.or a deliciously hot heaven.

What did Voodoo Bride think of it:
This is a pleasant paranormal romance with a slight bite added to it.

I will confess I had some trouble with liking Serena at first, she's too good to be true, but she slowly grew on me. Julian on the other hand is one dark, sexy hero with enough flaws for both of them.

The romance has a nice build up. There were times I wanted to kick some sense into Serena, but overall I really enjoyed the romantic storyline. It's hot and intense.

There was a second storyline that was meant to give Serena and Julian some outside resistance in getting together, but I could have done without that storyline. It didn't add much for me.

The world building and setting are interesting and the book is written in a light and easy style.

So in the end this was a nice, uncomplicated read and I might pick up the next book in this series once it is released

Why should you read it:
It's an enjoyable romance with demons and angels