I just can't resist a book that is based on Dutch folklore.
I'm very curious how Peterson will use the Witte Wieven. 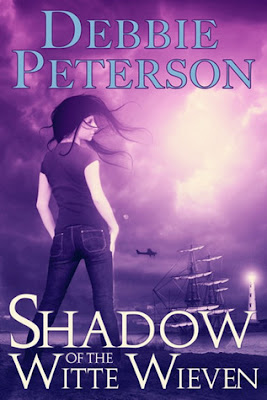 Shadow of The Witte Wieven
by Debbie Peterson

Despite a contract on her head, lone Drug Enforcement Agent, Aliyana Montijo must ferret out a mole and stop the assassination of top DEA officials, as so ordered by the Colombian drug lord she seeks to take down. The task is a daunting one, for there is no one she can trust. No one that is, until she encounters a most unlikely ally.

Former seventeenth century captain of the Dutch West Indies Company, Wolfaert Dircksen Van Ness, now from a parallel dimension, encounters the beautiful agent during an unearthly storm in the Bermuda triangle. Drawn to the Spanish beauty he rescues, he pledges his assistance, despite her reluctance to accept either his help or his heart.
Can Wolf bridge both space and time to claim the woman he loves?

Email ThisBlogThis!Share to TwitterShare to FacebookShare to Pinterest
Labels: wishlist

Great pick! It sounds like my kind of book - can't wait to check it out. Thank you for sharing! :)

What a nice surprise...Thanks for the mention, Sullivan!