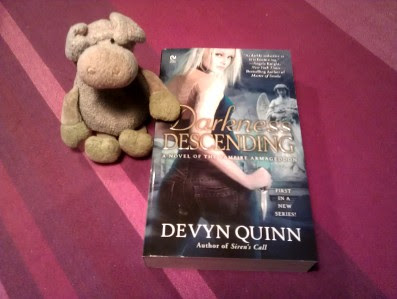 What is it about:
Fallen angels in the form of vampires are infecting humans one by one, creating an army fit for Armageddon. Jesse Burke, driven by vengeance to destroy the vampiric angels, has been protecting New Orleans from the onslaught, unaware that she has a much greater destiny awaiting her in the face of the oncoming apocalypse...

What did I think of it:
*spoiler ahead*
I did not finish this book!

It started out a bit slow, but ok. I had some minor grumblings, like the superhuman sentinels being named Palindromes (come on, it made me think of literature lessons in high school instead of immortal protectors) and the fact that I thought that Reyen, the Native American sidekick of Maddox was more interesting than Maddox himself.

But then about half way in and just when there was finally some action one of my pet peeves happened:
The hero and heroine have sex and right after the hero runs off to have intimate dealings with another woman!

That's when I decided to put down the book. I just didn't want to read the drama and whatnot that would unfold between Maddox and Jesse (Jesse of course saw him run off with the other female just to make things juicy) and only get a mildly enjoyable paranormal action storyline to go with it to take the edge of the drama.

I might read another book in this series, but only if it's about Reyen and I will toss it aside without any problem if again the drama is of the same kind as in this book.

Why should you read it:
It's a nicely written PNF if you can handle two-timing drama.

I understand, I have a quite mixed feeling about this book. Finally it was interesting but at the same time it was a little too much. What I really enjoyed was the new ideas in the book.